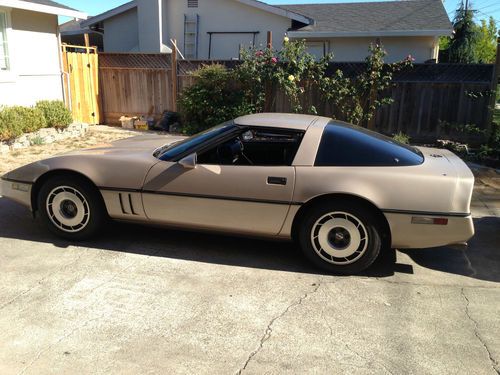 Condition: UsedA vehicle is considered used if it has been registered and issued a title. Used vehicles have had at least one previous owner. The condition of the exterior, interior and engine can vary depending on the vehicle's history. See the seller's listing for full details and description of any imperfections.Seller Notes:"Paint in good condition except for one patch on right rear, interior carpet is old, a couple of tears in drivers seat, air conditioning and power seat does not work. Some of the polarizing film is coming off the dash. Will need new weather-strip before winter"

Up for sale is my 1984 Corvette, never been in an accident to my knowledge. It has been my every day driver and has not let me down. Gold in color, the paint is in good condition except for a small patch on the right rear bumper (in pic). The interior is black and is in reasonable shape. Since I acquired the car I have replaced the seat belts, front shocks, hatch solenoid, headlight motor gears, front brake lines, master cylinder and brake booster,  and installed 4 new tires as well as four speakers and a remote iPod/iPhone player. Power windows and all dash lights are functional.

It has a clear California title and 11 months registration. Vehicle is for sale locally as well, so I reserve the right to end the auction if sold sooner. No warranty implied or expressed, I will work with your shipping company or you can pick the car up.