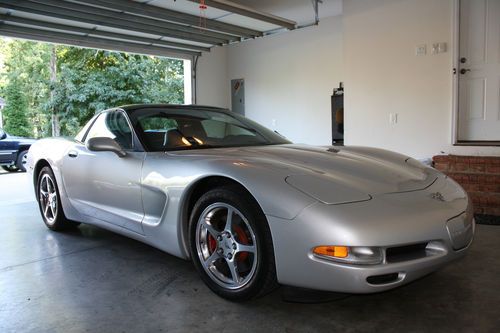 Automatic trans mission      Silver with black leather interior.      Does have the removable targa top.     Power everything.     Around 87,000 miles, and I do still drive it so the miles will go up a little but not much.   Well over half tread left on all four tires.   The wheels are factory chrome with 17" in the front and 18" in the rear.     Drives and runs great, no issues.   All stock.     Memory seats with 2 memory keys.   This car is super clean inside and out.    Has the headsup display that comes up on the windshield.    The steering wheel is a tilt/telescopic.   Am/Fm cassette player with Bose sound.  It is garage kept and leaks no fluids.

If you have any questions please ask all before bidding.

A $500 deposit is due with Paypal no later than 24 hours after auction ends.

The full amount of payment is due no later than 5 days after auction ends.

If you need more pics just email me and let me know which part and I wil get them to you asap.

I am open to trades also.