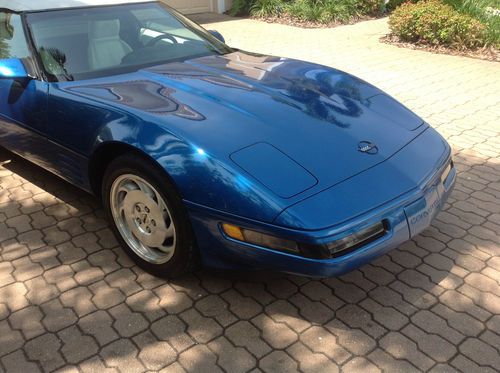 Condition: UsedA vehicle is considered used if it has been registered and issued a title. Used vehicles have had at least one previous owner. The condition of the exterior, interior and engine can vary depending on the vehicle's history. See the seller's listing for full details and description of any imperfections.Seller Notes:"Only 14,451 Original Miles"

Up for sale is a beautiful, must see to appreciate collectors item 1993 Chevrolet Corvette 40th Anniversary Edition Convertible automatic with only 14,451 original miles. With only one owner and driver, showroom condition, kept in climate controlled garage.  Paxton super charger dealer installed, it has all options available from dealer. I also comes with the original hard top Quazer Blue, vehicle has never seen rain or snow, nice car.

Have hard top - but not show in pictures
I have all original documentation from dealer, all window stickers, clear title in hand.
Pickup location is going to be Tierra Verde, Florida 33715
Very nice Corvette, I hate to sell it but I'm liquidating some of my vehicles that I simply don't use that often.
Thank you.

Accepted forms of payment are Paypay, Cash in person OR Certified funds