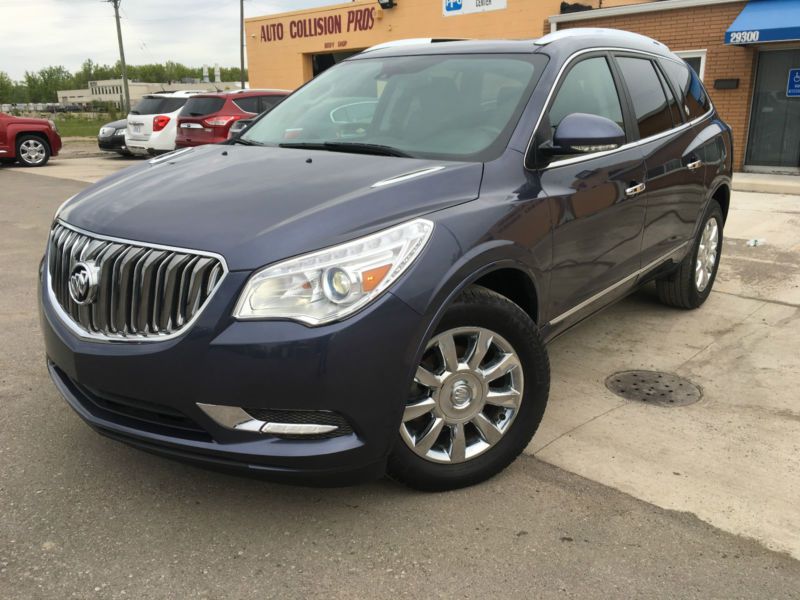 Vehicle :
2014 Buick Enclave Premium package 7 passenger nicely loaded with options, 3.6L V6 AWD (all wheel drive), rebuilt
title, ProGuard warranty, very clean in and out, just beautiful with an elegant color combination. With only 22K
miles, this one owner vehicle is like new.
This is a great deal, take advantage of this as I always list vehicles online with great savings.
Condition :
The Enclave is in superb shape in and out, very nice and clean with no damage or any signs of wear, very nice
glossy blue metallic paint, with elegant premium perforated black leather interior that sticks out real nice.
Drive train :
It's powered by the popular 3.6L V6 engine that delivers high horsepower and torque, coupled with a 6-speed auto
trans, and all wheel drive for the best handling and traction. Plenty of power delivered by the power train yet
efficient.
Options and Features :
Back up camera
Adaptive Xenon HID headlamps
Dual sunroofs
Factory remote start
Navigation system
Collision alert system
Lane keeping system
Voice activated, Bluetooth
Bose sound system
Power heated / cooled and memory seats
Climate control with rear aux.
Premium wheels
Park aid sensors
Chrome package
USB and AV inputs
Power lift gate
Power folding mirrors
and much more..........
Title / Paper work : The Enclave will come with a rebuilt title ready to be registered in any state as the state
inspection has been completed and passed 100%.