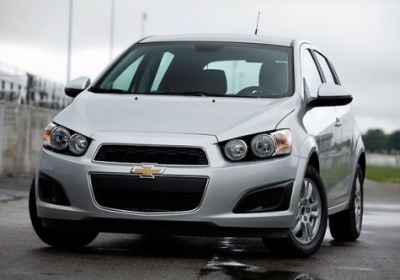 Four different General Motors vehicles from the 2012 model year are being recalled over a potential airbag issue. The driver's side airbag shorting bar in the 2012 Buick Verano and 2012 Chevrolet Camaro, Cruze and Sonic might make contact with the airbag terminals, even during a crash. If so, the airbag won't deploy when it should, possibly increasing injury to the driver.

The recall is expected to begin on February 13 for the 3,896 units that might be affected. GM will notify owners who can then take their vehicles to dealers to have the airbag coil replaced. A bulletin from the National Highway Traffic Safety Administration below has more info.

CONSEQUENCE:
If the bar and terminals are contacting each other at the time of a crash necessitating deployment of the driver's frontal airbag, that airbag will not deploy, increasing the driver's risk of injury.

REMEDY:
General Motors will notify owners, and dealers will replace the steering wheel airbag coil, free of charge. The safety recall is expected to begin on February 13, 2013. Owners may contact General Motors at 1-800-521-7300.