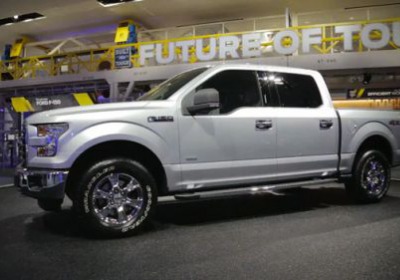 Despite having to share Ford's Detroit Auto Show stand with the hot new 2015 Mustang, the brand-new F-150 was arguably an even more important debut. Why? Ford moved some 700,000 examples of its F-Series truck in 2012, making it not only the best-selling pickup truck, but the top-selling vehicle in the US, by a long-shot.

The 2015 F-150 raises the bar for pickup trucks in a big way, with big-time use of aluminum. Because of this, roughly 700 pounds have been removed from the truck's overall weight, making it even more efficient than before, while still offering all of the capability that pickup owners expect. And with a host of engines under the hood, including a new 2.7-liter EcoBoost V6, the 2015 F-150 will surely offer something for everyone.


During the Detroit Auto Show, west coast editor Michael Harley took a closer look at the new F-150, talking to some of the truck's engineers. Have a look at the full video, below.