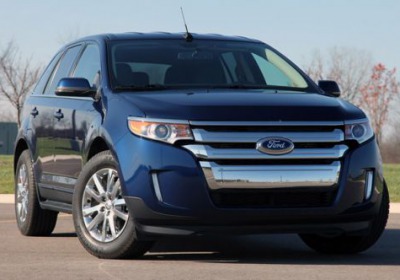 A problem with the fuel line on certain examples of the Ford Edge has prompted the National Highway Traffic Safety Administration to issue a recall. The issue revolves around the metal housing on the fuel line pulse damper, which was apparently improperly manufactured in the first place and is prone to crack in certain circumstances, leading to a fuel leak. And as we all know, a fuel leak is not a good thing.

The problem affects model year 2012 and 2013 Edge crossovers equipped with the 2.0-liter engine and manufactured between September 2, 2010 and April 25, 2013 - a total of 27,933 units. Although the Lincoln MKX is closely related to the Edge, since it isn't offered with the same engine (to which the problem is related), the recall does not include the premium-badged version. See the recall notice below for further details.


SUMMARY:
Ford Motor Company (Ford) is recalling certain model year 2012-2013 Edge vehicles manufactured from September 2, 2010, through April 25, 2013, and equipped with 2.0L engines. The fuel line pulse damper metal housing may crack as a result of an improper manufacturing process. A cracked fuel line pulse damper housing may result in a combination of fuel odor, weepage, or a continuous leak while the fuel system is pressurized.

REMEDY:
Ford will notify owners, and dealers will replace the fuel line with one that does not have a damper, free of charge. The safety recall is scheduled to begin on February 28, 2014. Owners may contact Ford at 1-866-436-7332. Ford's number for this recall is 13S13. IMPORTANT: This recall supersedes recall 12V-438. All vehicles that have been remedied under the previous recall need to have the current remedy applied.