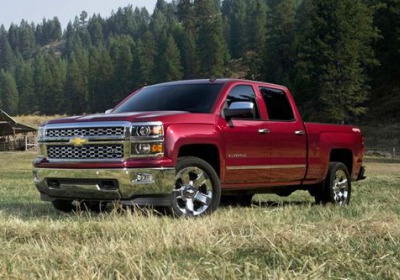 Chevrolet has thrown down the next hand in the pickup truck poker wars and revealed at least a couple of potential aces – depending on which numbers matter most to you. The 2014 2014 Silverado 1500 with its 5.3-liter EcoTec3 V8 gets 335 horsepower and 383 pound-feet of torque, is mated to a six-speed automatic, can tow 11,500 pounds with the optional Max Trailer Package and costs the same as the outgoing Silverado, $24,585 (*including $995 destination fee). Chevy says the Silverado also stands atop the fuel economy charts when comparing any competitor with a V8 engine – and some competitors with V6 engines. The two-wheel drive model returns 16 miles per gallon city, 23 mpg highway, 19 mpg combined in two-wheel drive guise and 16 mpg city, 22 mpg highway and 18 mpg combined as a four-wheel drive.

Elsewhere, the new Silverado gets a quieter cab with a redesigned interior, a new bed with improved load-management possibilities, disc brakes all around, tweaked steering and suspension, along with free standard scheduled maintenance for two years or 24,000 miles.

It goes on sale later this year with pricing throughout the lineup held constant from the 2013. The Double Cab (which replaces the Extended Cab) will cost $28,610, the Crew Cab going for $32,710, prices inclusive of destination. Two more engines, 4.3-liter and 6.2-liter EcoTec3 V8s, will join the range later on.

The press releases below have all the chest-thumping details on both models.

Manufacturer's suggested retail prices for the new 2014 Silverado regular cab will start at $24,585, including a $995 destination freight charge, the same base price as the 2013 model. For that price, the 2014 Silverado regular cab, which starts production this summer, will include a number of major improvements:
• A more powerful, more efficient EcoTec3 engine,
• A six-speed automatic transmission,
• A stronger, quieter cab with an all-new interior,
• Four-wheel disc brakes with Duralife rotors
• A new bed with standard box rail protectors and CornerStep bumper

The base starting prices for the Silverado crew cab, the first model to launch later this spring, and for the new double cab Silverado, which replaces the extended cab, also will be the same as for the corresponding 2013 models.

Buyers of all 2014 Silverados also will receive a standard scheduled maintenance program for two years or 24,000 miles, whichever comes first. Up to four maintenance visits are included in the price of the vehicle, each one of which includes a regularly scheduled oil change, oil filter replacement, tire rotation and multi-point vehicle inspection, based on the schedule in the vehicle owner's manual.

"The 2014 Silverado is new from hood to hitch," said Alan Batey, vice president, U.S. sales and service. "When you combine the innovative features of the new Silverado with base pricing equivalent to 2013 models and standard scheduled maintenance, Silverado becomes a great choice for pickup customers, helping them save money when they buy – and when they drive."

Proven V-8 power with better efficiency than a turbo V-6
The 2014 Silverado launches later this spring with crew cab models equipped with the all-new 5.3-liter EcoTec3 V-8, which is expected to power three out of four Silverado 1500s.

Silverado's 5.3-liter EcoTec3 V-8 is SAE certified at 355 horsepower and 383 lb-ft of torque, with more than 300 lb-ft of torque available from 2,000 to 5,600 rpm for responsive performance under a broad range of real-world conditions.

"EcoTec3 builds on 58 years of V-8 experience and trillions of real-world miles," said Luke. "The 2014 Silverado will give customers class-leading V-8 fuel efficiency and the peace of mind that comes with a proven V-8 design, a combination no competitor can match."

Best available towing rating of any light-duty pickup
Demonstrating the capability of the 2014 Silverado and its 5.3-liter EcoTec3 engine, double cab 2WD models equipped with the available max towing package, available later this year, will have towing ratings of up to 11,500 pounds, more than any light duty pickup currently on the market.

To further save customers money and reduce inconvenience, Silverado's 5.3-liter EcoTec3 V-8 is designed to operate on regular 87 octane gasoline even when towing or hauling.

Silverado will also offer later this year a standard 4.3-liter EcoTec3 V-6 that is expected to offer exceptional torque and towing capability for a standard V-6, and an all-new 6.2-liter EcoTec3 V-8, with even more power, torque, and towing capability than the 5.3-liter V-8. Final performance data and EPA estimates for these engines will be available in the coming months.

"In creating the 2014 Silverado 1500, we looked at a wide variety of powertrain configurations, and concluded that large-displacement truck engines could best provide the payload and towing capability that truck customers require, with the long-term dependability they expect," said Luke.

"Silverado's EcoTec3 technology eliminates the fuel economy penalty that often goes with rugged, high-torque truck engines. With our EcoTec3 engines, truck customers don't have to do more with less – more work with smaller engines. They can keep the benefits of a larger displacement engine and still get better fuel efficiency."

All three EcoTec engines feature direct fuel injection, Active Fuel Management (cylinder deactivation) and continuously variable valve timing, a combination not found in competitive trucks. The engines also use a compact overhead valve design and weight-saving components such as aluminum blocks and cylinder heads to reduce the mass of the engines for additional energy savings.

Other features that give the 2014 Silverado impressive capability include frames made from high-strength steel; rugged six-speed automatic transmissions; larger, stronger rear axles for V-8 models; and an updated suspension with two-stage multi-leaf rear springs.

Among the other updates for 2014 are a stronger, quieter cab; revised steering, suspension and brakes; and ingenious solutions for managing cargo in the bed.

The broadest portfolio, the right tools for the job
The 2014 Silverado 1500 crew cab will be joined later this year by a regular cab model and a new double cab model, which replaces the extended cab and features forward-hinged rear doors for easier access to the back seat. Also coming soon are new heavy duty pickups and an all-new midsize truck based on the successful global Colorado.

"Chevrolet will have the broadest portfolio in the business," said Luke. "No one will be better positioned to offer each and every truck customer the right tools for the job."

"In the core of the full-size truck market, the 2014 Sierra is second to none," said Tony DiSalle, vice president of GMC Marketing. "Truck owners expect durability, capability and fuel efficiency, and this latest generation of our proven V-8 is designed to deliver on those expectations."

The 5.3L EcoTec3 V-8 is just one of three more efficient new engines for the Sierra. With a standard 4.3L EcoTec3 V-6 that arrives this summer and a long list of standard features, the 2014 Sierra will have a manufacturer's suggested retail price of $25,085, including a destination charge of $995.

Sierra also will be available later this year with an all-new 6.2L EcoTec3 V-8 with even more power, torque and capability than the 5.3L. Additional specifications for the 6.2L will be released later.

Coverage is included in the price of the vehicle and includes up to four regularly scheduled oil changes, oil filter replacements, tire rotations and multi-point vehicle inspections, based on the schedule in the vehicle owner's manual. Customers will be eligible whether they lease or purchase and the coverage is completely transferable between owners.