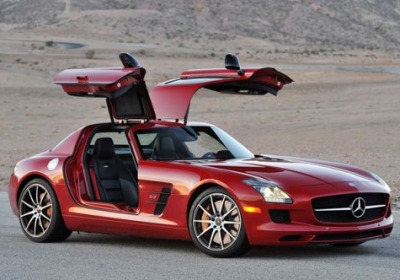 Mercedes-Benz upgraded its SLS flagship Coupe and Roadster for the 2013 model year, and the changes are marked with them new "GT" nomenclature. Both SLS models arrive with a retuned naturally aspired 6.2-liter V8 delivering 583 horsepower and 479 pound-feet of torque (the horses are up from 563, but the torque remains the same) mated to a revised seven-speed AMG Speedshift dual-clutch gearbox. Rounding out the mechanical upgrades is a redeveloped AMG two-mode adaptive suspension. Physically, the revised models are differentiated by their new "GT" badging, darkened headlight/taillight buckets, red brake calipers, unique wheel colors and high gloss finish on the front grille, exterior mirrors and hood/fender fins. Inside the cabin are new red seatbelts, Alcantara upholstery and contrasting red stitching.

As it is nearly impossible to experience the aluminum gullwing beast on public roads, Mercedes invited out to Southern California's Willow Springs to wring out the 2013 SLS GT Coupe on a racing circuit.