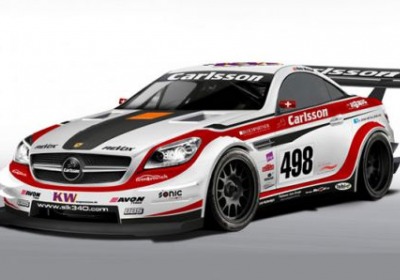 Carlsson's race-tuned versions of the Mercedes-Benz SLK have been taking checkered flags for years, and we won't be surprised if its SLK 340 hill climber fares any different. Developed by multiple German and Swiss hill climb champion Reto Meisel, the carbon-bodied SLK 340 with lightweight brakes and a closed underbody weighs 1,716 pounds. Propelling that tiny bit of weight is a 3.4-liter V8 from Judd with 610 horsepower, and it rolls on 18-inch wheels shod in Avon tires.

It will debut at the Geneva Motor Show before beginning its racing campaigns in the summer. This one won't just tear up roads in Europe, though – Meisel says he plans on bringing it to the Pikes Peak International Hill Climb. The press release below has more details.


The newcomer in international motorsport captivates with an abundance of modifications. The engineers have subjected the car, which was built from scratch on a body shell, to a comprehensive weight-loss regime. At the same time, it also received a power boost. Thanks to the use of the most modern materials, the Carlsson SLK 340 JUDD weighs in at only 780 kg on the scale. To accomplish this, an ultra lightweight body kit made of carbon was used. The aerodynamic components have been tested extensively, even in a wind tunnel, to connect a spectacular look with a perfect downforce. A closed underbody will further optimize the air resistance of the hill climb race car. Despite extensive changes, the SLK in its racing suit with its powerful rear wing looks extremely stylish. "We developed the design over a long period of time and with lots of feeling. We are proud of the awesome look. As an engineer, it is a pleasure to contribute to such a project, and we can show everything that is technically possible in the vehicle in cooperation with Carlsson", says Dipl.-Ing. (FH) Markus Schuster, Managing Director of Carlsson Germany.