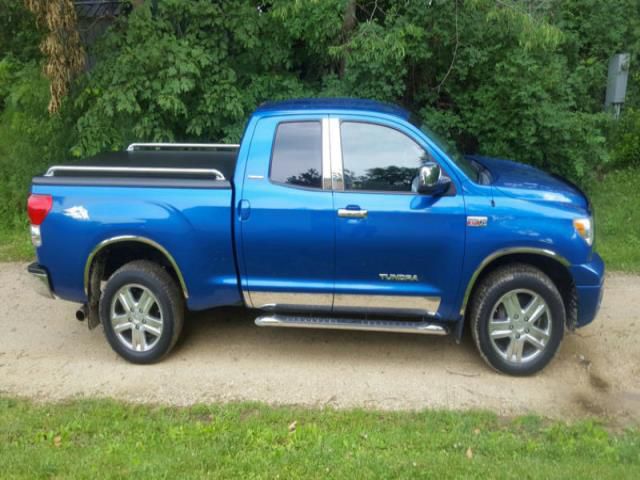 FOR SALE - Beautiful Blue Streak Metallic 2008 Toyota Tundra Limited! - This truck is Loaded with every option as well as many after-market items! I am the original Non-Smoking owner! - This truck has been garaged since purchased and babied. No accidents, no dents, and only a few minor surface paint scratches. I have owned many pick-ups over the years, but this is by far the best truck Ive ever owned! The only reason Im selling it is because I need a 1-ton dually truck for hauling now. People who see this truck cant believe that it is 8 years old, and I get comments from strangers all the time that this is one of the most beautiful trucks theyve ever seen!!! 95,000, mostly highway miles. - Standard Bed, 4x4, 5.7-Liter V8 w/6 Speed Automatic, Limited - 20-in. alloy wheels with P275/55R20 tires, DVD navigation system with backup camera with current factory 2015 navigation data disk, JBL AM/FM 4-disc in-dash CD changer, auxiliary audio jack, 12 speakers, 440W-peak-output amplifier, Bluetooth wireless technology capability and steering wheel audio controls - Exterior: Blue Streak Metallic - Interior: Graphite Leather - Accessories include: Chrome exhaust tip, Hood protector, Chrome Tube steps, All-weather floor mats and door sill protectors, XM satellite radio, and Remote engine start, Keyless entry, full sized spare tire which has never been used. - After market items include: UnderCover rigid Tonneau cover with chrome bed rails and telescoping hold-open shocks and locks. Tekonsha P3 electronic trailer brake controller, The Hornet electronic Deer Avoidance System, sprayed in bed liner, and Chrome accent panels. A/C ice cold, All scheduled maintenance, All records, Always garaged, Custom graphics, Excellent condition, Factory GPS system, Looks & drives great, Mostly highway miles, Must see, No accidents, Non-smoker, One owner, Satellite radio, Seats like new, Title in hand, Very clean, Well maintained, Very clean interior! This truck is priced to sell at $20,500 with a current NADA (May-August 2016) Clean Retail Value of $23,625. It breaks down like this: Limited Double Cab (4WD) Base Retail: $21250, 5.7L V8 Engine: + $850, Navigation System: +$400, Fiberglass Cap (On the Truck Options page) +$500, Towing/Camper Package (Also on the Truck Options page) +$200, and and a low mileage add of: +$425. - So why am I asking so much less than its book value? 1) I want to sell it soon! 2) This will need new tires before this winter if you are going to be driving in snow. 3) Although there is no rust showing through the paint anywhere, there are a few small rust bubbles under the paint that should be addressed soon at a body/paint shop. (One at the bottom of the tail gate, and one each at 3 of the 4 wheel wells. None larger than a 50 cent piece.) (stickers/decals easily removable!)
For further questions email me : burriesiveylxx@mynet.com