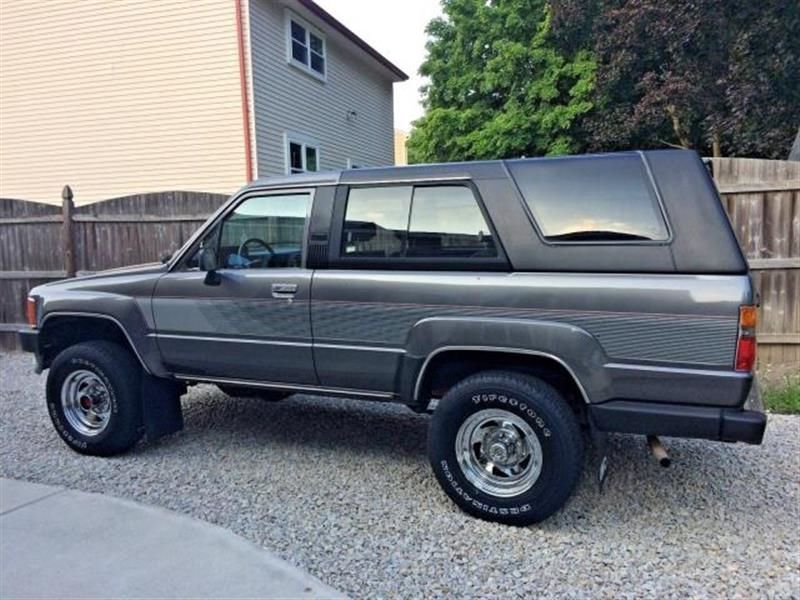 EMAIL : KatiePayneru9q@yahoo.com Truck has a dealer installed "conversion" package. See pic of window sticker.(Note-I disconnected cc cable from throttle body since I just don't want totrust it). I was told by a co-worker/Toyota fan that the interior appears to bepart of that package since he believed this is not the standard 4Runner cloth onseats and panels....IDK. I would love some feedback or comments from anyone thatknows these trucks well. No signs of any body repair. Nothing that leads me tobelieve this is not the original paint and decals. In terrific condition. Everything works. No cancer or rust through. Aftermarkettow hitch has some delamination that is causing hitch surface rust. Small bubblecoming up on left side bottom near corner of tailgate. Undercarriage is in verygood shape. Sale includes factory hardtop with all related interior trim soft top complete with all straps and framework, factory radio(just plug back in if so desired), new aggressive tread General tires on factoryrims along with chrome rims and new highway tread Firestone tires shown. include:New front rotors and pads, repack wheel bearings,caliper, front and rear shocks, oil drain plug gasket, oil change. Rear brakesvery good with nice strong emergency brake.Upper ball joints, tie preventative maintenance: thermostatwith temp sensor, factory throttle position sensor, air and fuel filters,factory "cold weather" starter (heav

A Nicer View Than Ever Of Middle Of The Road
When we had our first shot behind the wheel of the 2013 Toyota RAV4, the overall judgment from Managing Editor Jeremy Korzeniewski could be summed up in a sentence along the lines of, "Eh, not bad." The truth is that the compact crossover segment, now filled with not-so-compact offerings, is as cutthroat as any in the industry these days. When a heavyweight player like the RAV4 comes to market with a new generation, it is not at liberty to start from a clean sheet, lest it throw cold water on a vehicle that sells tens of thousands of units globally every month. Like De La Soul says, "Stakes is high."
If the choices in the marketplace were still largely limited to the Honda CR-V, as was the case when this market niche was green, the Toyota offering might actually seem like the exciting choice. But with new players offering better dynamic thrills (Mazda CX-5), cool turbo motors and fancy technology (Ford Escape), or even crunchy cred (Subaru Forester), the small crossover shopper is really spoiled for choice in 2013.