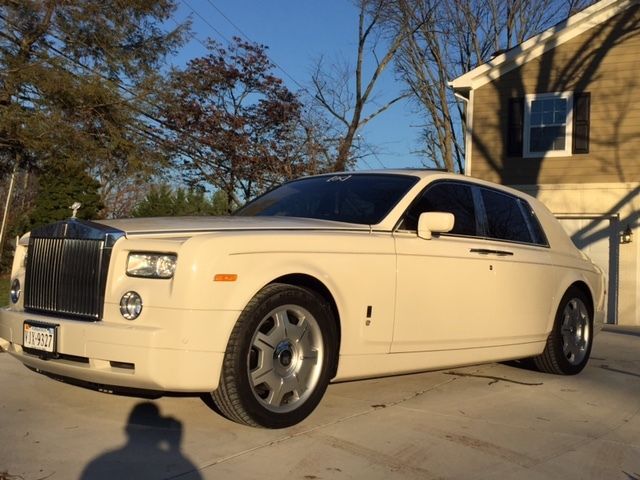 For more details email me at: candi.betton@metadatamitigator.com .

2007 Rolls royce Phantom, loaded, sunroof, rear DVDs entertainments .
very clean, no accident, service records, books, keys...
very nice color, white to creamy white color to yellowish that changes with lights during the day (you can see that
from the pictures, no filter taking by i phone)
the car has CPO warranty bumper to bumper, that covers service and any problems could happen. from rolls royce that
transferable to any one till 10/2017
I paid 20k for that warranty, (my lost is your gain) ,, JUST FYI it cost 6k just to replace the fuel pump on
phantom .. imagine you buy one without this warranty..the car in great condition, all works drive like dream, it gets the best 4 type pf wood that phantom ever made
it has Swarvski Crystal on the spirit of ecstacy that can be remove upon request that cost 3k to install..loaded
very clean. no scrachtes no dint nothing
a lot more...

The "Round Door" Rolls-Royce Phantom I Aerodynamic Coupe (inset) is a magnificent black beast of a car (and you can see it at the Petersen Automotive Museum for a limited time) as well as a mystery: designed by the Jonckheere Works in Belgium in 1935, all records for the one-of-a-kind coupe were destroyed in World War II, so no one knows who designed it or who commissioned it. What remains of the original coachbuilding company now makes bodies for cars and buses, and has asked designer Ugur Sahin to reinterpret the most fabulous car from its history.
We've written about Sahin often before, recently about his Corvette-based Anandi being shown at Top Marques Monaco and going into production. For a man who favors long hoods and short bodies, this particular Rolls-Royce couldn't be better. Sahin says the word "Respect" guided his lines for the 77-year-old car, the most apparent changes being the front fender treatment, the headlights dropping into the fenders, and the serious downsizing of the fin at the rear. Sahin says that there are talks with potential investors about building a one-off.
You can find out a little more about it in the press release below, and check out the gallery above of high-res images for every angle.