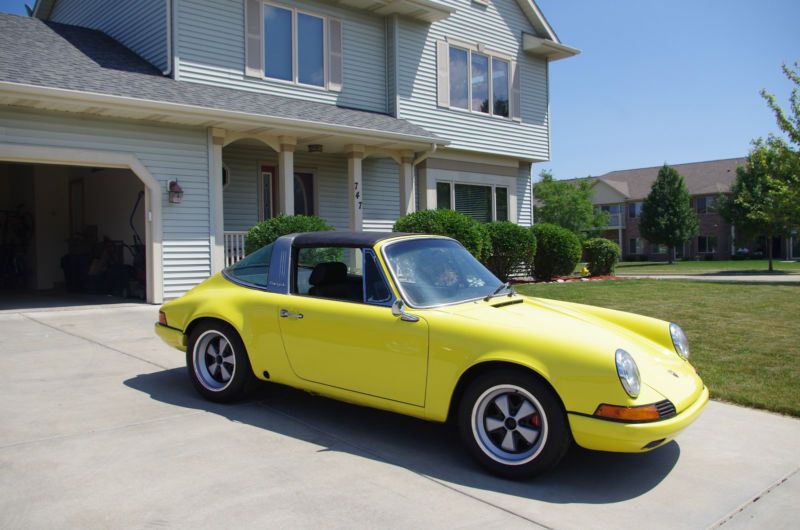 1971 Porsche 911T Hotrod Targa
Originally I purchased this car with a vision to create a drivable work of art which I could enjoy and work on
over time. Roughly 11 years ago I sought out a clean original early 911t which needed a restoration, but would not
be hurt by modifying it from the original equipment. Part of my criteria was a clean little rust body, T model
targa in Viper Green, Light Yellow or Gulf Blue. This particular car is from California originally and had very
little to no rust at all and is light yellow. I purchased it as a running roller, meaning it had all the body
panels a motor/transmission, but little else. All of the original interior and trim were not present on the
vehicle when I acquired it. Since then I have rebuilt everything on the car except the long block engine. My goal
was to make a modern interpretation of an early 911 similar to a Singer which could be driven any time you turn
the key, and functioned like new.
The body of the car has been modified. All the external trim has been shaved, so all trim holes were welded shut
and shaved over. The rear fenders were flared with fiberglass RS replica flares. At the time I did the body work
steel RS flares were out of production and hard to acquire. Since then this has drastically changed and metal RS
flares are available again from Porsche and the aftermarket. All other panels on the car are original metal, but I
do have a fiberglass ductail I will include in the sale as well. Pictures of the car with and without the tail are
posted.
All of the turn signal lens have been replaced. The original headlights were backdated to 1967 911 lenses, but
with HID balasts and projectors. Unlike the original 911 headlights, these work and allow driving at night safely.
Not to mention they look a little better.