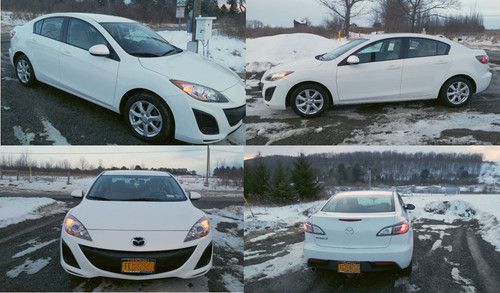 It's a beautiful mint 2011 Mazda 3 i touring white with automatic transmission and lot more convenience features.
only 16400 miles and I got to tell you that it is very well trained car. (test drive one in seller and mine. you will see the difference)
It is very quite in high speed. not to compare with corolla, civic, and sentra
there was roof wreck right after I bought it in 2011 due to the heavy snowfall while I parked under the roof. No damage were found in engine room.
it is now absolutely clean and no problems at all!

The Cure For The Common Corolla
I hate the Toyota Corolla. I'm not talking about the new 2014 model; I can't yet judge a car I haven't driven. I'm referring to the current, old-as-dirt sedan. As an appliance, I get why people buy it, but it represents everything that I, as a car enthusiast, dislike. I don't like looking at it, I don't like sitting in it, and I really don't like driving it. There is absolutely no amount of emotion dialed into any part of the Corolla experience and every other vehicle in the segment is a far better choice. But still, somehow, Toyota sells 'em like hotcakes.
Thankfully, there are a lot of people who agree with me. And for folks like us, companies like Mazda exist. This small Japanese automaker places emotion and driver involvement as its top priorities when creating new products, and mostly - especially in recent years - the end results have been great. The new CX-5 crossover is a doll, to say nothing of the rakish and lovely new Mazda6 that launched earlier this year. And let's not forget the Miata...