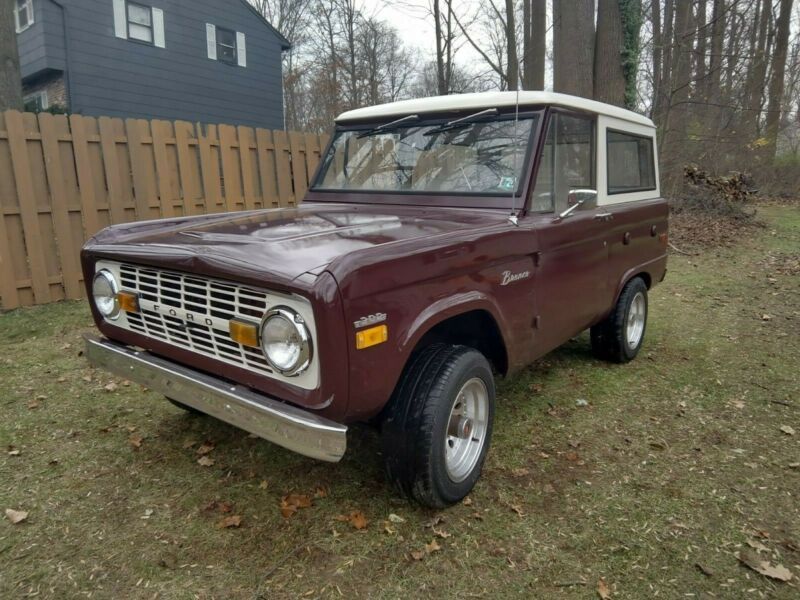 1971 Ford Bronco (Manufactured December 1970). This Bronco is uncut and for the most part
original. The Title is Clear. I purchased this Bronco on eBay in 2017 from a seller in Chambersburg PA and the
truck now resides outside of Philadelphia, PA. The Bronco had a 1999 expired PA Inspection sticker on it when I
got it and the seller said it had been sitting in a barn (or garage) for 17 years. All the metal on this Bronco
was original when I got it so it was indoors for a while or there would have been much more rust.

The engine starts easily and runs well, The internal engine is original to the best of my knowledge so
there is the usual amount of engine wear you would expect on a 100K 50 year old Ford 302 V8 engine.

· Body work, the driver, passenger ,and rear bed floor pans have been replaced. There are new door jambs,
and the passenger rocker panel is new. I replaced the front grill as it was too pitted to easily restore. The
driver rocker panel is good and strong but there is some rust in the lower front corner.

· The brakes (Factory Manual) work as good as they probably did when it left the factory. The master
cylinder is new, the brake lines where necessary (about 50%) have been replaced and all four drum brakes have ALL
new components.

· The drive train works great, the transmission, transfer box and front end all work fine, and I have had no
need to replace anything. The drive shaft to the rear has new CV Joints and the 9” Rear has new axle and pinion
bearings and seals and new lubricant.