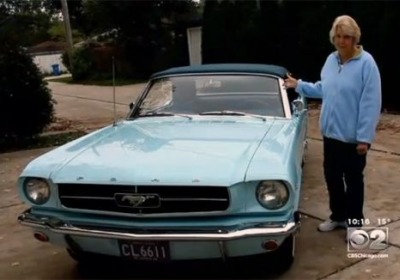 As Ford celebrates the 50th anniversary of the Mustang with the unveiling of the all-new sixth-gen design, one Chicago women can lay claim to a piece of Mustang history. According to CBS Chicago, Gail Wise was the first person in the US to buy a Mustang in 1964, and she did so two days before the car was even unveiled to the public.

Wise, then a 22-year-old teacher, went into the Chicago Ford dealership wanting to buy a convertible, and a salesperson ushered her over to car covered by a tarp. That car was a baby blue Mustang convertible, which she still owns today – along with the documentation. After sitting for almost 30 years and undergoing a full restoration, the car now looks to be in original condition. The report says that this $3,400 purchase could be worth anywhere between $100,000 and $250,000. While this worked out well for Mrs. Wise, we wouldn't recommend anyone going into a dark, back room of a dealership hoping to get a jump on the purchase of a 2015 Mustang.

Scroll down to watch the video report.