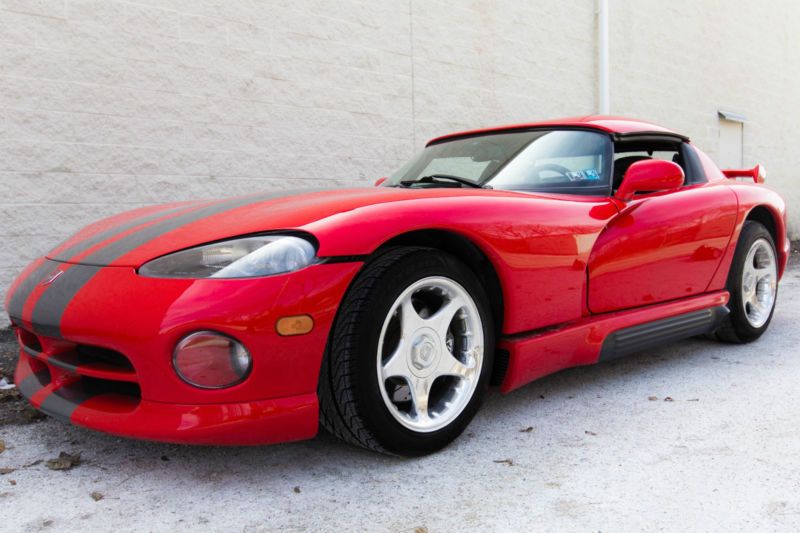 1994 Dodge Viper RT-10
20 Valve, 8 L V10 motor producing over 400HP and over 465 Torque
Pre "assembly line" this car is hand built and number 220 of nearly 2,200 built!
Manual, 6 Speed RWD
12 MPG CITY and 20 MPG HWY (est)
New Headlights (old ones "yellowed")
HID Fog Lamps
2 cold air intakes
Pulstar Iridium Spark Plugs
Royal Purple Oil and Filter (will be changing oil upon purchase at my expense)
Routine Maintenance every 6 months (will perform tune up and maintenance upon purchase at my expense)
Cross Drilled and Slotted roaters
New Carpet with the Viper Logo embroidered on them
Alpine head unit with Polk Audio Speakers all around
New Racing steering wheel and shift nob, Leather (originals included)
Recently re-painted a little over 2 years ago
Car was bumped in a parking lot recently with spider-web cracks under right head lamp (no other damage)
Scratches under front bumper from low ground clearance
Road blemishes from everyday driving
Stripe on front bumper was misaligned causing a 4 inch long curve and would need to be repainted or touched up to
correct. This would need to be done anyways due to the cracking under the head lamp as mentioned above. The
misalignment is on the same side and near the damage.
Passenger side inside door handle missing the plastic cover
Center console is showing signs of wear, leather is healthy but the plastic under body is cracked.
E-Brake cable was replaced 3 years ago
New power steering pump and resonator this year
Tires and Brakes are healthy
Rear Carbon Fiber spoiler (painted to match the car)
Hard Top and Soft Windows included
Car starts and runs like a dream!