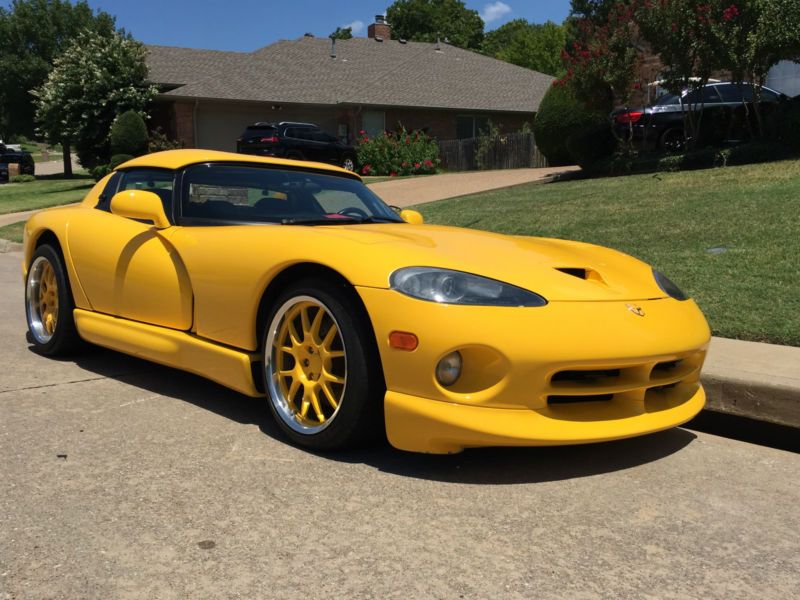 All-disc antilock brakes are new for 2001 on Dodge’s high-performance, retro-styled RT/10 convertible. Dodge
also added Viper Race Yellow for 2001 so this vehicle will be perfect for the discerning collector. Because Vipers
still draw attention, despite being over 2 decades old, collector demand is a consideration when buying. More than
20,000 Vipers have been sold since the snorting rear-drive two-seater debuted as a 1992 model.
No other sports car on the market in 2001 was on par with the Viper, a throwback to the era of all-out muscle
machines, whose V-10 engine cranks out no less than 450 horsepower. In fact, no other production car used a V-10
engine in 2001. The engine catapults you from 0-60 in under 4 seconds and melts the ¼ mile in 12.2 seconds.
Exterior
Designed to bring back memories of the Shelby Cobras seen on American roads and racetracks back in the 1960s, the
Viper ranks as an exercise in excess but one that’s basically simple in styling. Both the convertible and coupe
share such design features as a bold crossbar grille, huge side scoops in the front fenders and a long, wide hood.
This vehicle has the optional removable hardtop, color matched of course. This viper rides on new 275/35ZR18 front
and even bigger 335/30ZR18 rear tires mounted on custom color matched Forgeline VR-1 Wheels.
Interior
Two occupants sit in low reclining custom Italian leather yellow interior with black contrast stitching and Viper
logos by a reputable Viper community interior maker. The seats are now adjustable, unlike previous model years.
Standard equipment includes air conditioning, a tilt steering wheel, remote keyless entry, fog lights, a
theft-deterrent system, and power windows, locks and mirrors, overhead mesh storage pouches and a trunk light. The
vehicle has a professionally installed Alpine audio system with custom subwoofer in the factory location.
Under the Hood
A brawny 8.0-liter V-10 engine beneath the Viper’s hood puts out 450 hp and 490 pounds-feet of torque — the
kind of torque that seems ready to drag tree stumps out of the ground. It was the biggest, most powerful engine
offered in an American production automobile in 2001 and stands strong with production muscle cars even nearly 15
years later. A custom Borla exhaust is estimated to add approximately 20 HP bringing the total to a head smashing
470 HP. A six-speed-manual gearbox is the only available transmission.