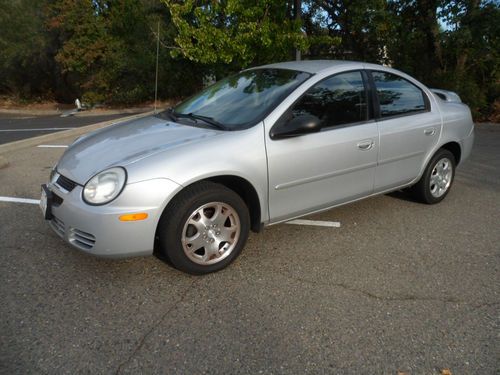 Condition: UsedA vehicle is considered used if it has been registered and issued a title. Used vehicles have had at least one previous owner. The condition of the exterior, interior and engine can vary depending on the vehicle's history. See the seller's listing for full details and description of any imperfections.Seller Notes:"small dent in bumper on left side by license plate."

I have been a member on ebay for a while under stacy916 I just started a new account for business the other is personal  I have a good record feel free to look at my other account.

I am selling a 2005 Dodge neon it does have high miles but they are highway miles also the cylinder head was just replace and I have all the receipts. this car should be good for another 100 k miles. the neon also has a new coil pack and just passed smog. It is very clean it was a business mans commuter. The neon runs perfect and is a 5 speed manual transmission. Keyless entry and alarm.  Please contact me with any questions. thank you.

This is a rust free California car.