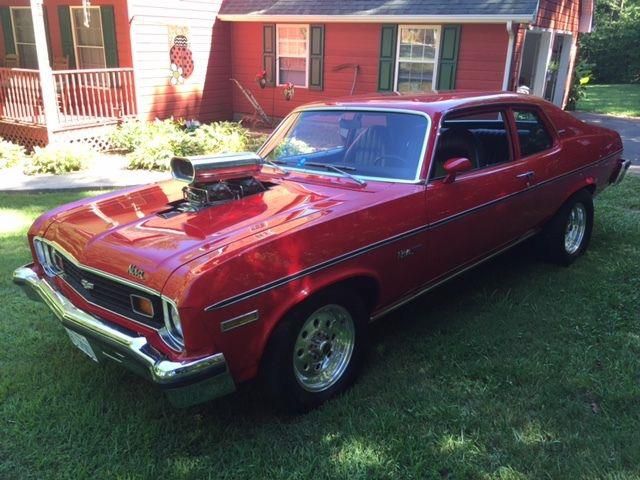 Send me questions at : ManyBournazianzisf@yahoo.com

Selling a 1974 Nova. CAR LOOKS WAY BETTER IN PERSON THAN IN PICS. This car isregistered and street driven. NOT A TRACK CAR. Very FAST Car! Bought in NC.Engine - 350ci Chevy 5.7L engine. Has a 671 Blower. Two Holley carbs. Idealsgreat and runs very very very well. Pushing an estimated 700+ Horsepower. Hasbeen broken in properly and very well maintained. Not been ran hard and onlydriven to cars shows but also interstate at 70 and does well. Transmission -Turbo 350 Automatic Transmission. TCI Torque Converter with Stall. Shifts verysmoothly but crisp with no issues! Paint - Red is a brilliant shine. Has a fewsmall bubbles showing (quoted 400$ to remove and blend). Interior -Black interior with great dash and headliner. Gauges are put in Correctly. Backseat has tears (see pics). Safety - This car has traction bars and larger tiresfor speed and control. Also very large exhaust, loud for attention but not tothe point it bugs the driver or breaks noise laws, Aggressive sounding can thatreally turns heads and pulls the eyeballs at cruises and car shows. LINE LOCK ifyou really want the attention. This is a high performance car but built to bestreet driven, Very very FAST. If you want to drag race the car then you wouldneed to change gears for best times. Excellent cruiser or daily driver car readyfor car shows or cruise ins. Sold as-is where-is. Discribed to the best of myknowledge and ability.