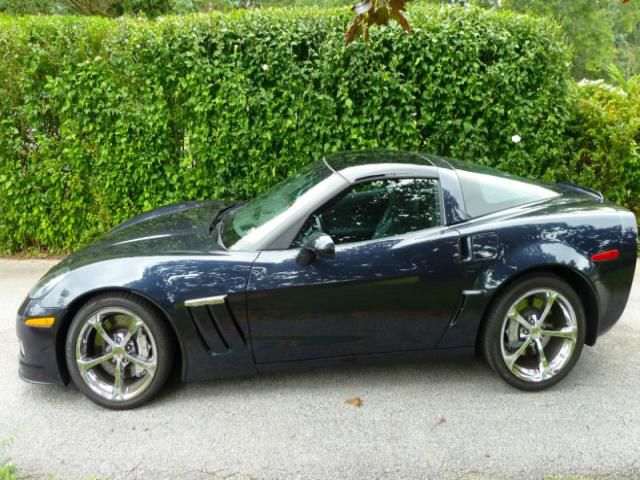 The Grand Sport coupe and convertible share the LS3 engine with the base model coupe and convertible, and can be had with a 6-speed manual or automatic transmission. The Grand Sport comes standard with wider wheels and tires, a revised suspension, extra cooling, larger brakes, and specific manual gear ratios, and a dry oil sump. All Corvettes come with standard air conditioning, keyless entry, a stereo system with MP3 playback, cruise control, power accessories, dual-zone climate control, leather seating and steering-wheel mounted audio controls. Chevrolet provides its flagship sports car with plenty of standard safety features, too, like anti-lock brakes, driver and passenger air bags, tire pressure monitoring, traction control and a limited-slip differential. This Corvette Grand Sport is in like new condition without any dings or dents or mechanical issues. It still smells like new! I am the original owner and the only person who has driven it. No one smoked in the car nor was food ever eaten in this car and it has been garaged the entire time I've owned it. Never been snowed or rained on. I have only hand washed it and the only person to ever wash this vehicle. The brakes are oversized and are the same ones used on the Z06 as is the suspension. The exhaust system is upgraded dual-mode performance that adds 6 more horsepower. The 2LT Trim package includes Navigation System with AM/FM/CD/MP3 Player, Bose Premium Audio 9 speakers, Bluetooth for phone, a Head Up Display, Luggage Shade and Cargo Net. Other options include Chrome Aluminum Wheels, Dual-Mode Performance Exhaust, and Removable Transparent Roof Panel. Gran Sport LS3 engines are built up by hand at a separate engine shop.