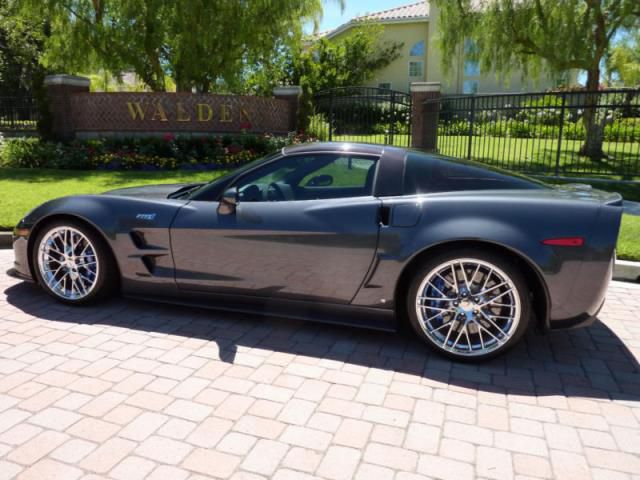 CALIFORNIA ZR1 CORVETTE "SUPERCAR" THE MOST POWERFUL, FASTEST, MOST BEAUTIFUL CORVETTE THIS CAR IS AMAZING. I HAD A NEW Z06 CORVETTE RECENTLY AND THAT CAR DOES NOT COME CLOSE TO THIS ZR1 SUPERCAR PERFORMANCE. SIT DOWN, BUCKLE UP AND HOLD ON!! BHP 638 @ 6500rpm Torque (lbs/ft) 604 @ 3800rpm BHP/Ton 430 0-60mph 3.4s 0-100mph 7s 60-100mph 3.6s 1/4 Mile 11.3s Terminal Speed 131mph Kilometre N/A Top Speed (mph) 205 NÃ¼rburgring Lap Time 7:26 FULLY LOADED WITH NAVIGATION, FULL LEATHER WRAP INTERIOR, CHROME WHEELS, ADJUSTABLE RIDE CONTROL, CARBON FIBER ALL AROUND, NEW "BORLA EXHAUST", TINTED WINDOWS, BILLET EMBLEM EXTENSIONS ON NOSE AND REAR, ETC.......AND THE BRAKES....THEY ARE AMAZING...CERAMIC COATED! THIS CAR WILL STOP ON A DIME. AS YOU CAN SEE FROM THE PICTURES, THE CAR IS AMAZING. PAINT IS PERFECT, DEEP AND MOST LIKELY THE MOST LIKED COLORS OFFERED / CYBER GRAY WITH FLAWLESS BLACK LEATHER INTERIOR. ONE OF THE PICTURES SHOWS THE CAR WITH ONE SIDED SILVER FENDER STRIPES....THOSE ARE VERY EASY TO TAKE OFF WITH A HAIR DRYER. JUST THOUGHT THE CAR NEEDED A LITTLE "POP! THIS IS A CALIFORNIA CORVETTE WITH A PERFECT CARFAX. THIS IS THE ULTIMATE CORVETTE ...... ALL HAND BUILT AND APPROX. ONLY 1400 BUILT IN 2009 NEVER/EVER DRIVEN IN THE RAIN....CAR IS LOCATED IN SOUTHERN CALIFORNIA ONLY DRIVEN ON SUNNY DAYS FOR PLEASURE AND LOCAL CAR SHOWS. POLISHED AND WAXED MONTHLY !! CAR LOOKS WET ALL THE TIME!!! THIS IS A PRIVATE PARTY SALE...NO ADD ON "DEALER'S" FEES / HIDDEN COSTS ..