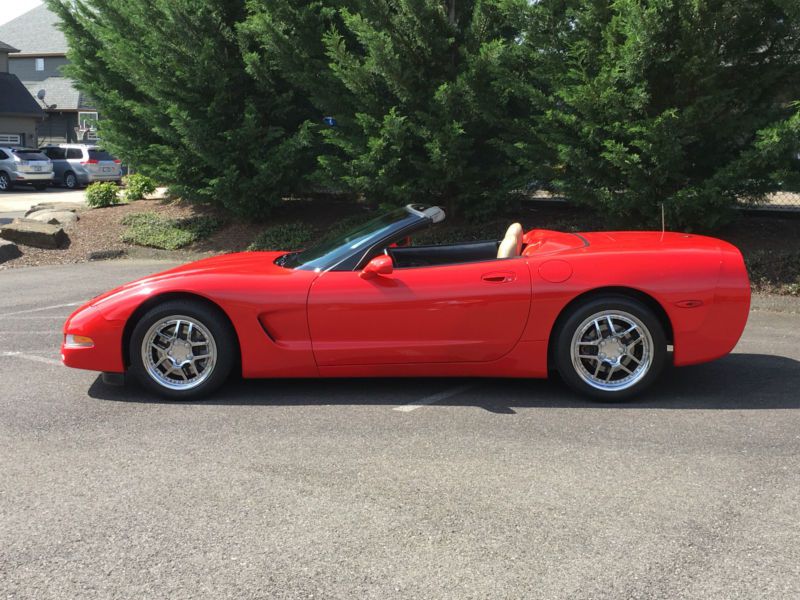 For more pictures email at: janeluangrath@brusseler.com .

HERE IS YOUR CHANCE TO OWN THIS BEAUTIFUL RUST FREE AMERICAN MADE
C5 CORVETTE
.. RARE TO FIND ONE IN THIS CONDITION ..
WITH THESE LOW MILES
HERE IS
A
100%
RUST FREE
1999
CHEVY
CORVETTE
CONVERTIBLE
C5
6-SPEED MANUAL
2-DOOR
REAR WHEEL DRIVE
TOURCH RED
POWERED BY A
5.7'LITER 350 8'CYLINDER POWERFUL ENGINE!!
345 HORSE POWER VEHICLE FROM THE FACTORY
6-SPEED MANUAL TRANSMISSION
THAT SHIFTS INTO GEAR WITH NO PROBLEMS
WOW
( ONLY 40,701 ORIGINAL MILES )
THIS IS A ONE ADULT OWNED VEHICLE
BEEN VERY WELL CARED FORE AND ALWAYS SERVICE SINCE 1999
WITH ON TIME OIL CHANGES AND WHAT NOT
BRAKES..TIRES..BATTERY...ECT''
ORIGINAL BOOK MANUAL
CLEAN HISTORY
NO DING NO DENTS
ITS A NON SMOKING AND NON PET OWNED VEHICLE
THIS VEHICLE HAS BEEN BABIED SINCE NEW AND STILL PRESENTLY
HAS ALL FACTORY OPTIONS
POWER WINDOWS
POWER DOOR LOCKS
POWER MIRRORS
POWER SEATS
POWER STEERING
POWER BRAKES
CRIUSE CONTROL
TILT STEERING WHEEL
AIR-CONDITIONING
NICE LEATHER INTERIOR
FACTORY GM AM-FM CD PLAYER WITH 12-DISC CD CHANGER
CONVERTIBLE TOP IS IN EXCELLENT SHAPE
HAS A DEFROSTING REAR WINDOW
CHROME POLISH WHEELS
AND
NEWER SET OF TIRES ON IT
THIS SPORTS CAR
RUNS, DRIVES, STOPS, TURNS AND LOOKS GREAT!
BEEN GARAGE KEPT SINCE NEW
IT IS IN EXCELLENT CONDITION!!!
FOR BEING OVER 17 YAERS OLD
GREAT RUNNING AND VERY HEALTHY VEHICLE!!!
THIS VEHICLE IS IN GREAT SHAPE AND TONS OF FUN TO CRUISE AROUND IN
YOU WONT BE DISAPPOINTED WHEN YOU SEE AND DRIVE IT FOR YOUR SELF
A REAL CREAM PUFF
DON'T SNOOZE AND LOSE