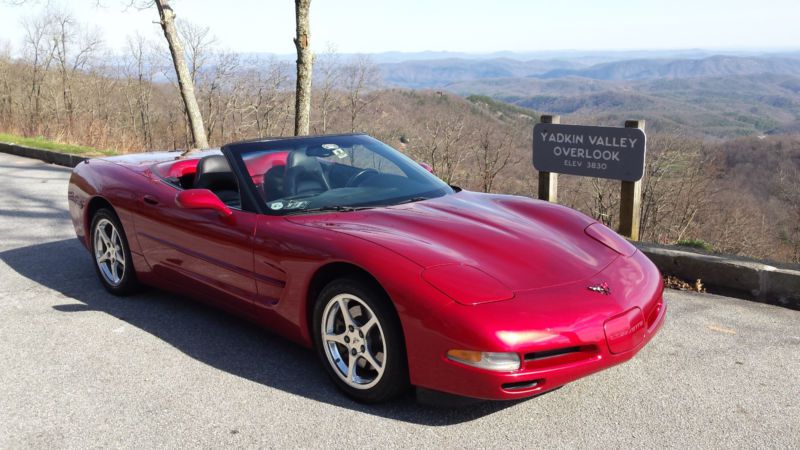 ANY QUESTIONS JUST EMAIL ME: bea.mccarron@powdermail.com .

The original window sticker comes with the car, and indicates that this Corvette was delivered TO General Motors.
The sticker price of this car with standard equipment was $46,605; and additional equipment included Corvette
Convertible Preferred Equipment Group 1 ($1,800), polished aluminum wheels ($1,200), 6-speed manual transmission
($815), magnetic red tint coat ($600), AM/FM, stereo with CD player ($100), body-side molding ($75), floor mats
($25), destination charge ($645), for a total delivered price of $51,865.
With only 17,xxx original miles on the car when I brought it, I have added about 30,000 miles to the total over the
last 11 years, predominately highway miles with a few Florida trips thrown in. It is always garaged and covered
when not driven, and it never has been out to play in the snow, ice and salt. It does have a few minor chips on
the nose, most of which are almost invisible. The interior sun visors have had the lighted mirrors come loose.
The run-flat tires were replaced with identical tires at the 28,000-mile-mark, and a new battery was installed last
year. It has had some bodywork done at the local Chevrolet dealer after a minor parking-lot incident in 2006. and
a dented door edge (garage incident this year - opened door into wall) has been repaired.
With all that said, the car is beautiful, well-maintained, tight, fast, and so much fun to drive. The original
owner told me that he had driven the car at 175 mph on the GM test track, and I believe him - it has that much
power and control.