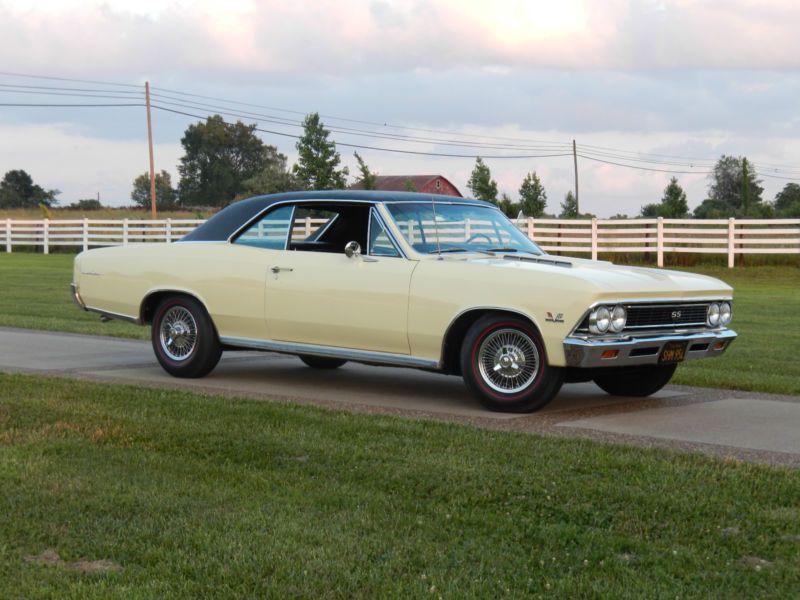 For sale An original CA and AZ rust-free car which retains the original Black Plate on the front bumper.
Factory options are power steering, power brakes and air conditioning. The original matching numbers 396/325 hp
engine has been rebuilt and runs great. Also comes with a 4-speed manual with all new components. Everything works
great.
The car has the original sheet metal including floors, trunk, quarter panels, roof fenders and hood. The body was
stripped and bead blasted to bare metal and re-done to the original factory color of Lemonwood Yellow with PPG base
coat clear coat paint, color sanded and buffed.
The body and paint are excellent. The car looks and runs great. This Chevelle is one of the cars in Alice Cooper's
collection.
POWER BRAKES AND CONVENIENCE GROUP LIGHTING
factory shifter
AM/FM radio
Original WHEELS
woodgrain steering wheel
tachometer
Original style interior
Finished in beautiful blue paint,
This classic 1966 138 SS Chevelle has been meticulously, restored and sure to be An absolute head tuner. All the
bright work On the car from the bumper to the trim rings produces a mirror like reflection same attention to detail
is shown on the exterior restoration, It is also apparent on the interior and underneath. This 1966 138 SS Chevelle
has several desirable features such as, power brakes, A V-8 big block , and a A 4-speed transmission, 12 bolt rear,
all of which makes this car a true joy to drive.
The 396 V-8 sounds great and gets the car up to speed with absolute ease. don't miss your chance to own the
pinnacle year for the Chevelle with this well equipped and beautifully restored.