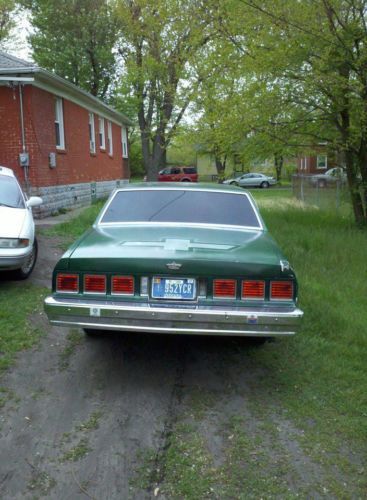 Condition: UsedA vehicle is considered used if it has been registered and issued a title. Used vehicles have had at least one previous owner. The condition of the exterior, interior and engine can vary depending on the vehicle's history. See the seller's listing for full details and description of any imperfections.Seller Notes:"1983 chevy caprice classic has one missing handle for door on passengers side front door. Some rust. needs a new lighting fixture for appearances but the right passengers side light does function. Needs front end work and Oil pan work. front end work probably consists of struts and possibly axle repair."

1983 chevy caprice classic 84k , air conditioning, was running perfect till i bust my suspension in front this year. Will need new suspension, struts, and the oil started leaking when suspension went.Needs new oil pan. Engine itself is fine interior decent gray. Must schedule pick-up with me in 1-2 days of sale. Great running car up until bottoming out on a manhole cover. Great Mechanics special. Only reason I decided to get rid of it is I have three other vehicles already.Purchaser takes vehicle in As-Is condition.PURCHASER MUST ARRANGE PICK UP.