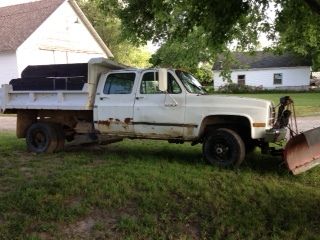 Truck cab is rusty from being a plow truck. The bed of the truck is in decent shape tho. It has minimal rust. No rust holes thru and not beat up. The dump bed is electric over hydraulic and works as it should.

The engine has a blown head gasket but still runs. The transmission lost drive and overdrive the last time the truck was used this winter.  The truck will need towed and is not driveable. It does move on its own power and has low and reverse still.

There is some wiring issues with the fuel pump. I had to run a hot wire to the fuel pump ignore to get it to work. I only used the truck to plow snow at my home this winter so I never took the time to fix it correctly.

Tires have decent tread left but are showing some dry rot now.

The snow plow is a 8' western that also works as it should.

My reserve is well below what the dump bed, snow plow, and dana 60 is worth.

Balance is due within 3 days of auction end unless other arrangements are made.