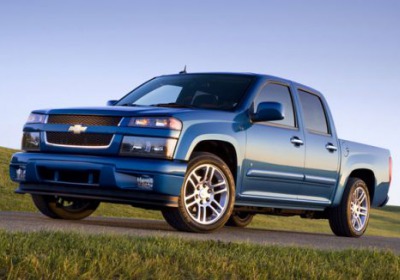 General Motors has announced a recall of 118,800 Chevrolet Colorado and GMC Canyon pickup trucks due to the possibility of secondary hood latches not being installed at the time of manufacture. The affected vehicles are from the 2010, 2011 and 2012 model years, all of which were built between November 9, 2009 and August 28, 2012.

According to the official National Highway Traffic Safety Administration report, these trucks fail to "comply with the requirements of Federal Motor Vehicle Safety Standard No. 113, 'Hood Latch System.' The hood may be missing the secondary hood latch." In other words, owners of these trucks could find their vehicles' hoods opening unexpectedly while driving.

The official recall campaign is expected to begin on January 17, 2013. Dealers will inspect the affected pickups and if a secondary hood latch is not present, one will be installed free of charge. Scroll down to read the official NHTSA report.

General Motors is recalling certain model year 2010-2012 Chevrolet Colorado and GMC Canyon vehicles manufactured from November 9, 2009, through August 28, 2012, for failing to comply with the requirements of Federal Motor Vehicle Safety Standard No. 113, "Hood Latch System." The hood may be missing the secondary hood latch.

If the primary hood latch is not engaged, the hood could open unexpectedly. During vehicle operation, this could obstruct the view of the driver and increase the risk of a crash.

General Motors will notify owners and instruct them to inspect their vehicle for the presence of a secondary hood latch. Dealers will replace the hood on any affected vehicles, free of charge. The recall is expected to begin on January 17, 2013. Owners may contact Chevrolet at 1-800-630-2438 or GMC at 1-866-996-9463.