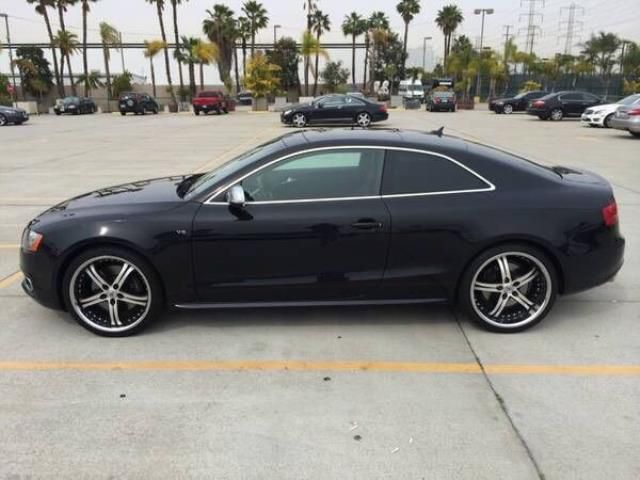 Up for sale is my fully loaded 2012 Audi S5 Phantom black with black leather with alcantara inserts . It has only 29,500 miles and drives great with no issues. it has 20" lexani wheels which looks amazing on this car. I have driven the vehicle for about 20,000 miles now and it drives great with no issues. I have owned this vehicle for almost 3 yrs . Wheels have some curb rash from normal driving which is usual. Who ever buys this vehicle will not be disappointed and will be extremely happy for saving over $10,000 compared to buying a non salvageLoaded with 4.2L V8 Engine, 6-Speed Manual Transmission, Leather with alcantara inserts Seats, Heated Front Seats, Power Front Seats, Driver Seat Memory, Power Glass Moonroof, Leather Steering Wheel Trim, Cruise Control, Audio Steering Wheel Controls, CD Audio System, Navigation System, Bang & Olufsen premium sound system, voice control nav/phone, Automatic Climate Control, Power Windows, Power Door Locks, Power Exterior Mirrors, Xenon HID HeadlightsVehicle History: It does have a salvage/ rebuild title due to front end damage. Vehicle was purchased from an insurance auto auction from the insurance company. Vehicle was driveable in damaged state and the airbags were not deployed since the damage was not major. Vehicle had no frame , engine or suspension damage considering the damage was not major. Below is a list of parts replaced , all parts replaced are oem Audi parts. Vehicle has a had 4 wheel laser alignment and has gone through CA inspection. This is truly a clean and safe car repaired the correct wayHood, front bumper, grille, bumper reinforcement, left headlight, radiator support, radiator and misc plastic pieces and since I've owned the vehicle: I replaced the oil and filter along with cabin and air filter, First month after my purchase of the vehicle. I have replaced oil and filter every 7.5k miles since(Audi I believe suggests every 15k) so yes maintenance has been up to date. Rear tires were replaced not too long ago and have over 90% tread and front tires are virtually new , both were replaced about a month ago a week apart from each other due to both having a flat due to road debris. Unlucky for me but the new buyer will not have to worry about tires for a while. Car is solid with no issues, you will not be disappointed.

Between the Consumer Electronics Show and the Detroit Auto Show, Audi is creating plenty of buzz lately for its upcoming third-generation TT. Fortunately, we won't have to wait too much longer to see the next Audi TT, though, as Autocar reports that the coupe will make its big debut at the Geneva Motor Show.
In speaking with Audi's technical chief Ulrich Hackenberg, the article states that the 2015 TT will first be revealed in March before going on sale later in the year. Previewed by the Allroad Shooting Brake Concept (shown above), it isn't that hard envisioning what the new TT could look like: ditch the shooting brake roofline, tall ride height and obvious conceptual design cues. Of course, if this styling is more your thing than the two-seater TT, Hackenberg left open the possibility of a TT Allroad or even a TT-based crossover.