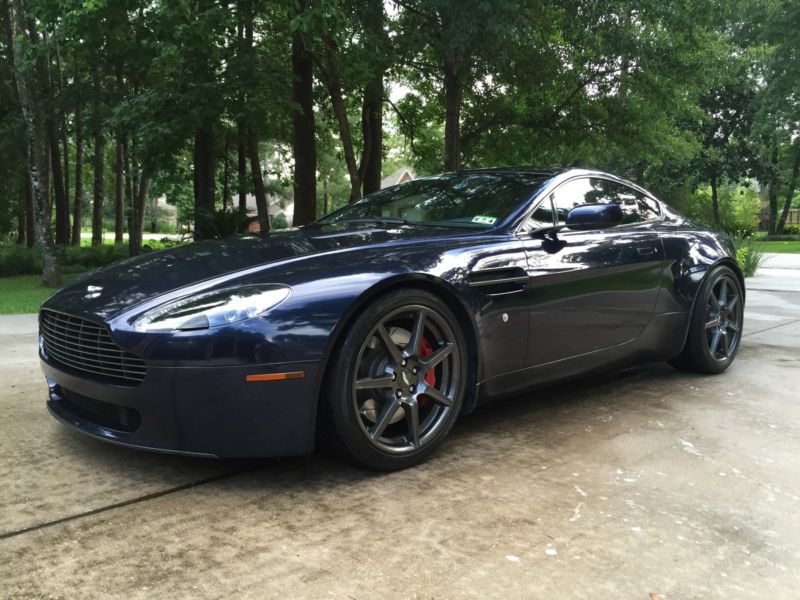 Platinum Warranty (A) from LaSalle Warranty Group until September 25, 2015 (another 3 months). Not your typical
AMV8. Very well cared for ( I hand wash it using the AMMO NY method ) and upgraded. Installed wheel spacers, H&R
lowering Springs, custom hand-fabricated aluminum air intake (larger and smoother ID than the original ugly rubber
"snorkle" more air, more power), professionally painted over all exterior chrome (front grill, side grill slits,
window trim) and rims with Titanium Gunmetal (even the custom air intake). Car was tuned by Fastlane in December of
2013 to get every bit of power out of the engine. This car drives and handles superbly. The blue/ saddle leather
interior still has the most pleasant new-car aroma. Bluetooth, Aston Premium sound system, driver and passenger
adjustable power seats with adjustable lumbar control, heated seats, auto climate control, red caliper Aston brakes
(made by Brembo). Previous owner replaced the clutch at 16,000 miles (sooner than necessary, but one less thing to
worry about). New rotors and Carbotech brakes May 2014. Partial clear bra on the hood, mirrors and front of car. I
purchase nice cars to drive for a few months and then sell them. This car has been with me for 19 months now as it
is very difficult for me to part with. I only drive it twice a month and when the wife wants to go out in town;
hence the low miles: I only put about 4,200 miles in 18 months. **UPDATE: Due to failing state inspection, I just
had the dealer replace one O2 sensor, the catalytic convertor and the re-called seat heater unit. No issues with
this car. I am the 4th owner. Previous owners were in North Texas and Arizona. I have not titled the car since I
have Dealer Plates on it; original title in hand. There is normal wear and tear and the clear bra would be better
replaced with some of the newer technology.