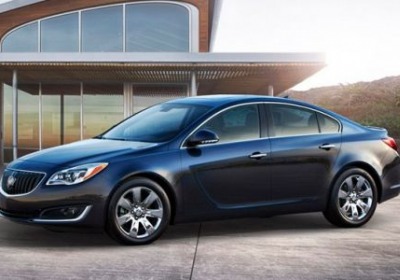 Although the current Buick Regal hasn't even been on the market for very long, General Motors is using the New York Auto Show to unveil an updated version of the sedan in a similar fashion to what we saw yesterday with the 2014 LaCrosse. Like the LaCrosse, all 2014 Regal models will be getting a new look both for the exterior and interior design, but the big news takes place under the sedan's skin.

Except for the base Regal eAssist, the Regal Turbo and Regal GS will both be adding the benefit of all-wheel drive, but there is no word as to how much weight this system will add to each car's curb weight. The Regal Turbo's 2.0-liter turbocharged four-cylinder has received a decent bump in output from 220 horsepower and 260 pound-feet of torque to 259 hp and 295 lb-ft; unfortunately, these same figures are carried over to the Regal GS, which means that car drops from 270 hp. Both turbocharged models (Regal Turbo and Regal GS) will now be offered with all-wheel drive and the ability of sending more than 90 percent of the engine's torque to the rear wheels.

In terms of styling, the 2014 Regal gets similar styling changes found on the updated Enclave and LaCrosse, including reworked fascias, scalloped headlights and a full-width chrome strip spanning between the new LED taillights. Inside, key changes were made to the Regal's cabin technology, such as the instrument gauge cluster and infotainment system. On the Regal and Regal Turbo, a new 4.2-inch color display is available for drivers to see information for the vehicle, navigation and audio systems, but the Regal GS' cabin is slightly different with an eight-inch configurable gauge display. One of the best changes may be the overall reduction in buttons on the center stack, creating a cleaner-looking and easier-to-use cabin.

Like the 2014 LaCrosse, the 2014 Regal will also get updated safety and infotainment technology. The next-generation IntelliLink system improves connectivity with better voice recognition and higher levels of customization that include a customizable, five-button top menu and a lower menu that can store up to 60 favorites for the audio, phone and even navigation systems. As for safety, the Regal gets two new optional packages that add forward collision alert, land change alert, rear cross traffic alert and an adaptive cruise control system.

The new 2014 Buick Regal goes on sale this fall, and the official press release is posted below.

NEW YORK – Buick revealed the new 2014 Regal today, designed to be a sportier and smarter evolution of the brand's dynamic midsize sedan. New purposeful technologies enhance safety and the driving experience with a more refined turbo engine – along with the introduction of all-wheel drive.

Adaptive Cruise Control is also offered. It senses traffic in front of the Regal to adjust vehicle speed, including stopping the vehicle in heavy traffic and accelerating again.

"The new 2014 Regal is more expressive, more connected and more technologically advanced," said Tony DiSalle, U.S. vice president of Buick Marketing. "Nearly half of new Regal buyers are conquests who are new to Buick and they represent the youngest median age among the brand's lineup.

"The new Regal gives those discerning buyers more of the technologically advanced features they want in a modern luxury sedan, all with the style and refinement they expect from Buick."

New front and rear styling, with bold, signature wing-shape LED daytime running lamps and LED taillamps were designed to give Regal a more contemporary and premium presence. The interior features a redesigned central instrument panel and console along with a new fashion interior trim combination.

The new 2.0L turbo engine delivers 18 percent more horsepower in the Regal Turbo, for a greater feeling of on-demand power The available Haldex all-wheel-drive system helps make the most of traction in all driving conditions and also enhances the cornering capability of the Regal GS when driven in the GS mode of the Interactive Drive Control System.

A 2.4L engine with eAssist light electrification technology is also available on the 2014 Regal. Six-speed automatic transmissions are matched with both engines and a six-speed manual is available in the Regal GS. Electric power steering is now featured on all models.

The new Regal makes its public debut at the New York International Auto Show, where it will be on display March 29-April 7. It goes on sale this fall.

More expressive, inside and out
New exterior styling evolves the Regal's appearance with cues that enhance a low, wide proportion and were made to convey a more upscale and contemporary presence. New headlamps with standard LED daytime running lamps and a revised grille show the new "face" of Regal, while at the rear Enclave-inspired LED wing-shape taillamps give the car a familial look. A new chrome accent bridges the taillamps to further enhance Regal's wide stance.

The new headlamps are available in two versions, including halogen projector beams and xenon high-intensity discharge. The available LED daytime running lamps form a distinctive wing profile above the headlamps, designed to give the Regal an unmistakable signature on the road.

The instrument cluster is also new, with a high-resolution, 4.2-inch color display that delivers vehicle information, navigation, audio system functions, phone features and more. In Regal GS, an eight-inch configurable color instrument cluster screen is standard. It allows the driver to customize the displayed information with adjustments via steering wheel controls. This premium instrument display is framed with chrome accents and delivers chronograph-style graphics in two modes: Touring and Sport. It is also complemented with a pair of semicircle mechanical instruments for the tachometer and other vehicle functions, befitting of the GS's driver-oriented mission.

While the Regal's new interior brings more amenities and enhanced personal technology, it does so with greater simplicity. The new center stack radio controls have only seven buttons vs. the previous 17. The large, eight-inch color touch screen is designed for easy operation with intuitive controls and smartphone-influenced swipe recognition for easier navigation. Dual-zone climate controls also feature capacitive-touch operation and are framed in chrome.

"The advanced technologies in the 2014 Regal complement its flowing passenger environment, with integrated elegance," said Ven Lai, Buick creative designer for color and trim. "The cabin's rich, tailored elements are executed in warm tones and soft-touch materials that enhance the premium ambience in a thoroughly contemporary manner."

"It's an inviting environment, with the warmth and expressive style that is attracting more customers to the brand," said Lai. "With new choices, such as the Cocoa/Saddle combination, we've increased the style quotient for Regal."

In addition to easily identifiable icons covering everything from navigation to phone to music apps such as Pandora, next-generation IntelliLink is designed to accommodate new features and enhancements and be highly customizable. It also features natural language voice recognition, which allows customers to more safely place calls, enter destinations, browse media, play music and control other functions simply by telling the vehicle what to do.

The IntelliLink system can store up to 60 favorites, including radio stations (AM/FM/XM), contacts, destinations, music and other media. This feature is convenient for those who travel to the same destination regularly and want to save locations such as hotels and restaurants.

On its eight-inch screen, customers can "fling" through lists, swipe and drag just as they would on a tablet or smartphone. In fact, users with compatible smartphones can pair them with IntelliLink using Bluetooth or a USB connection. That gives customers the ability to play passengers' music or other media through the vehicle.

Another feature allows customers whose Regals are equipped with available embedded navigation to enter destinations in a single step, without having to enter the state, city, street number and street name in successive efforts. City-by-city weather reports are also provided.
OnStar can be accessed via the screen display as well as by the traditional Blue button.

A new, nine-speaker Bose sound system is available and projects the music and radio selections made with IntelliLink. It includes strategically placed tweeters and a subwoofer that complement the Regal's acoustically optimized interior.

Regal GS offers a driver-centric experience
The Regal GS is designed to deliver a dynamic driving experience through sophisticated suspension technologies, premium amenities and a more expressive presence. Along with its standard turbocharged powertrain, the GS features the exclusive application of Buick's Interactive Drive Control system, which allows the driver to select different drive modes – including the GS mode and its track-oriented competitive setting.

More refined, efficient 2.0L turbocharged engine
A new 2.0L turbo engine debuts as the standard powertrain in the 2014 Regal Turbo and Regal GS, advancing the legacy of an engine recognized as one of Ward's 10 Best Engines in 2012. Although it shares the same displacement as the previous turbo engines offered in the Regal, it is a next-generation architecture with friction-reduction technologies designed to enhance refinements on a variety of levels.

The turbocharger features a twin-scroll design that uses exhaust tuning to generate balance between maximum power and excellent turbo response, enabling the engine to deliver a broad torque band. It also supports the responsiveness associated with larger-displacement, naturally aspirated performance engines. Boost is controlled electronically with a pressure-actuated wastegate and the airflow is controlled during transients with an electronic bypass valve. Those controls enable optimal performance, throttle response and efficiency.

The 2014 Regal is also available with the 2.4L with eAssist light electrification technology, using a lithium-ion battery system and electric motor-generator to enable regenerative braking capability. Instead of providing all-electric propulsion, the system provides power assistance to the internal combustion engine. The eAssist system also allows the engine to shut down fuel delivery in certain deceleration situations, which saves additional fuel.

All-wheel-drive system offers optimized handling
The 2014 Regal is offered with a new, all-wheel-drive system designed to make the most of handling and stability in all driving conditions. It is an advanced, fully automatic and on-demand system that includes developments in wheel-slip management and an electronic limited-slip rear differential.

Input from a variety of sensors – wheel speed, steering angle, etc. – automatically tailors the torque distribution between the front and rear wheels, for maximum traction. The eLSD enables adjustment to the torque split between the rear wheels to optimize vehicle stability and cornering capability.

If the vehicle's front wheels lose traction, the AWD system is capable of sending more than 90 percent of the engine's torque to the rear wheels. Fine balancing of the drive torque between the axles raises the threshold at which StabiliTrak's throttle and braking interventions are triggered, enabling closer driver interaction.

The Collision Mitigation Braking feature can intervene in certain crash-imminent situations, automatically triggering emergency braking if the driver fails to respond to a previous alert. With Lane Change Alert, the driver is alerted to vehicles in the blind sport during a lane-change or merging maneuver.

About Buick
Buick is a modern luxury brand offering vehicles with sculpted designs, luxurious interiors with thoughtful personal technologies, along with responsive-yet-efficient performance. Buick is attracting new customers with its portfolio of award-winning luxury models, including the Enclave crossover, Regal sedan, Regal sport sedan, Buick Verano sedan and the all-new 2013 Encore crossover. Learn more about Buick cars and crossovers at www.buick.com, on Twitter @buick or at www.facebook.com/buick.