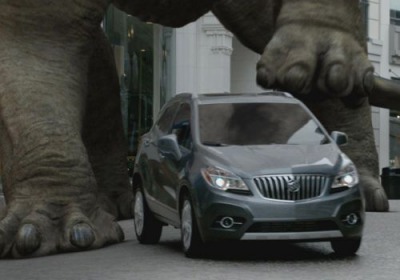 The whole "SUVs as dinosaurs" trope has become something of a threadbare cliché among auto writers, but that doesn't mean the wider world of consumers has caught on to the Jurassic nature of our line of thinking. That's what General Motors appears to be betting on, at least. Just check out Buick's first television spot for its 2013 Encore, the tiny crossover that is pushing the Tri-Shield into territories unknown while looking to outrun the brand's reputation as a refuge for elderly clientele.

Set to air this weekend on ESPN during the NCAA college basketball tournament, the ad plays up the Encore's maneuverability and surprising interior space by setting the baby Buick amongst a herd of lumbering CG dinosaurs created by Tippett Studio, the folks behind Hollywood blockbusters like Jurassic Park, Ted, and the Twilight series of films.

We can't help but snigger a little – while the Encore is indeed surprisingly roomy, nimble, and composed, our first drive found it to be glacially slow, too... not unlike a certain prehistoric race of animals. Check out the commercial below and judge for yourself.

DETROIT – When the Buick Encore hits the airwaves with its first TV spot, it will make a big statement about being small. The new luxury small crossover commercial, called "Dinosaur," debuts this weekend on ESPN.

In the spot, the nimble crossover makes its way through city streets crowded with the oversized "dinosaurs" traditionally perceived as the standard in the luxury segment. The maneuverable Encore has a turning circle of 36.7 feet – almost a foot and a half less than a Mini Countryman – but still seats five or offers as much as 48.4 cubic feet of storage with the rear seats folded.

"There's a misconception in the luxury car market that the best amenities and technology are limited to larger vehicles," said Tony DiSalle, vice president of Buick Marketing. "With vehicles like the Encore and Verano, Buick is redefining customers' expectations with a great combination of content, efficiency and passenger space in a smaller overall package."

Tippett Studio of Berkeley, Calif., worked with Buick to create the life-like animals rendered in the ad. The company developed the Velociraptors and T-Rex for the 1993 blockbuster, Jurassic Park.

"We have decades of experience imagining how dinosaurs moved when they roamed Earth," said Phil Tippett, founder of Tippett Studio. "And it's been exciting to watch the technology evolve. Making those Raptors slide through Jurassic Park's kitchen required an innovative combination of stop-motion animation and computer graphics. For the Buick commercial, we could do it all on computers, allowing for more life-like muscle movement."

Encore is the first crossover of its size from Buick. It offers an EPA-estimated 33 mpg on the highway for front-drive models, the best of any crossover from a domestic automaker. Encore is available with features such as a heated steering wheel, rain-sensing wipers and Forward Collision Alert, which uses a camera to analyze traffic ahead. Every Encore comes standard with a seven-inch infotainment screen and IntelliLink connectivity.

About Buick
Buick is a modern luxury brand offering vehicles with sculpted designs, luxurious interiors with thoughtful personal technologies, along with responsive-yet-efficient performance. Buick is attracting new customers with its portfolio of award-winning luxury models, including the Enclave crossover, LaCrosse sedan, Regal sport sedan, Buick Verano sedan and the all-new 2013 Encore crossover. Learn more about Buick cars and crossovers at www.buick.com, on Twitter @buick or at www.facebook.com/buick.

About Tippett Studio
Tippett Studio, founded in 1984 by animation pioneer Phil Tippett, is an Academy Award®-winning visual effects company specializing in a wide range of CG animation and digital effects for feature films, television and commercials. The company has created visual effects for over 70 films including Ted, The Twilight Saga, Cloverfield, Enchanted, Hellboy, Hollow Man, Starship Troopers, Jurassic Park and Robocop. Phil Tippett earned Academy Awards® for Return of the Jedi and Jurassic Park and two Emmys for Dinosaur! and Ewoks: The Battle for Endor. Tippett Studio's commercial work has garnered four Clio awards for the Carl and Ray series for Blockbuster Entertainment. Tippett Studio is currently in production on M. Night Shaymalan's After Earth.
# # #