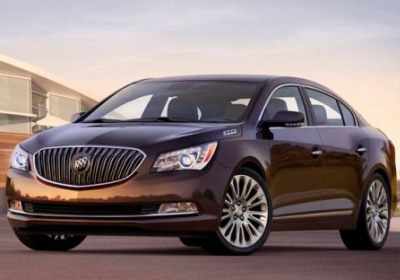 Buick might have one of the smallest lineups among major automakers, but by the time the 2014 model rolls around, it will definitely have one of the freshest. Debuting at the New York Auto Show this week, the 2014 Buick LaCrosse receives numerous styling changes inside and out, and it benefits from many of the same new features found on closely related models like the Cadillac XTS and the 2014 Chevrolet Impala.

Exterior changes are relatively minor, but they still help give the car a fresh, new look. The new face of the 2014 LaCrosse fits in with recently new or redesigned Buick models with its oversized waterfall grille, LED-trimmed headlights and the signature hood vents being moved to the side of the hood rather than the top. Similar changes have been made to the rear, like the reshaped LED taillights, the full-width chrome trim and a new fascia design; LaCrosse models equipped with the 3.6-liter V6 will still get the integrated exhaust finishers but they're executed in a more stylish manner than the current model. Finishing off the exterior, new wheel designs are also being introduced, which will include bringing 20-inch wheels to the sedan's option list.

Inside, Buick redesigned almost the entire cabin to create a more luxurious and upscale appearance. The instrument panel is essentially carried over, but pretty much everything else has been redesigned and updated with the biggest change being to the driver's area. Dual eight-inch configurable displays make up the center stack and gauge cluster, while the overall number of buttons have been reduced from 17 down to just seven. The 2014 LaCrosse will also be offered with the next-generation IntelliLink, which receives many of the same enhancements as Chevy's latest version of MyLink adding better customization, improved voice commands and more features including Pandora. Additionally, new door panels, seat and center console complete the LaCrosse's interior redesign.

Buick will offer four interior color combinations, and there is a new Ultra Luxury Interior Package available. Aptly named, this package will bring a high level of luxury to the 2014 LaCrosse with ash wood trim, semi-aniline leather seating and a synthetic suede material used on the headliner and door panels. New safety features will also be offered on the new LaCrosse, like forward collision alert, lane departure warning, land change alert, rear cross traffic alert, adaptive cruise control and, similar to the Cadillac XTS, Safety Seat Alert that vibrates the lower seat cushion "indicating the direction of a potential crash threat." We're not sure if this works identically to the XTS' system, which can warn of oncoming cars from either side while backing up and buzz the seat in conjunction with the lane departure warning system.

Powertrains will continue to come from either the 3.6-liter V6 or the 2.4-liter four-cylinder used on the base eAssist model, and while fuel economy numbers have not been announced yet, all 2014 LaCrosse models will also benefit from improved aerodynamics with active grille shutters. V6 models equipped with the Touring Package will continue to bring real-time suspension damping to the sedan as well as Buick's HiPer front struts.

Scroll down to check out the official press release for the 2014 LaCrosse, and we'll bring you more pictures of the sedan tomorrow live from New York.

Adaptive Cruise Control is also offered. It senses traffic in front of the LaCrosse to adjust vehicle speed, including stopping the vehicle in heavy traffic and accelerating again.

"We evolved the interior and exterior design, increased luxury amenities and materials, and enhanced the safety and personal technologies to give customers more reasons than ever to rediscover Buick," said Tony DiSalle, U.S. vice president of Buick Marketing.

Globally, LaCrosse sales have exceeded 500,000 since its 2009 introduction and U.S. sales topped 57,000 in 2012, making it more popular than many other full-size luxury sedans, including Lexus ES, Acura TL and Lincoln MKS.

The 2014 LaCrosse is offered in front-wheel-drive and all-wheel-drive models and offers two powertrains: a 2.4L engine with eAssist light electrification technology or a 3.6L direct-injected V-6. Each is paired with a six-speed automatic transmission.

All models feature Buick's QuietTuning engineering process that reduces, blocks and absorbs unwanted noise from the LaCrosse's cabin, making it one of the quietest in the segment.

The new LaCrosse makes its public debut at the New York International Auto Show, where it will be on display March 29-April 7. It goes on sale this summer.

The LaCrosse's new appearance is instantly recognizable as a modern Buick and the LED lighting elements enhance its technologically advanced presence. The headlamp housings, for example, have a more angular appearance and LED signature accents that echo a familial appearance introduced on the 2013 Enclave crossover. They've also been positioned slightly outboard to reinforce the car's presence.

The new Bi-Xenon headlamps incorporate new technology with enhanced brilliance that improves visibility, is energy-efficient and environmentally friendly (mercury-free). Active Forward Lighting is paired with these HID lamps, turning them with the direction of the front wheels to enhance visibility around corners.

At the rear, a full-width chrome accent reinforces the car's stance, while fully enclosed exhaust outlets (3.6L models) are framed with a chrome finish within a new rear fascia. It's a more integrated appearance designed to show Buick's attention to detail. An integrated rear spoiler is incorporated in the trailing edge of the deck lid to help improve aerodynamic performance and new LED taillamps – in all-new, wraparound housings – provide a safety benefit by illuminate more quickly than conventional bulbs when the brakes are applied.

In the front and rear, LaCrosse's new LED lamps continue the wing-shaped signature appearance that distinguishes Buicks day and night.

While the LaCrosse's new interior brings more amenities and enhanced personal technology with next-generation IntelliLink, it does so with greater simplicity. The new center stack radio controls, for example, have only seven buttons vs. the previous 17. The large, eight-inch color touch screen is designed to be easier to operate with intuitive controls and smartphone-influenced swipe recognition for easier navigation. Dual-zone climate controls also feature capacitive-touch operation and are framed in chrome.

The rear-seat headrests fold down to enhance rearward visibility, while the new four-way adjustable front headrests are designed to provide a greater range of comfort, particularly for taller drivers.

The new Ultra Luxury Interior Package features premium semi-aniline leather. It covers the seats, console armrest and door armrests and is complemented by synthetic suede on the headliner and door pillars. The Sangria contrast color with the Ultra Luxury interior is exclusive to LaCrosse.

QuietTuning
LaCrosse's use of Buick's unique QuietTuning engineering defines Buick quality, sound and vibration characteristics and refinement by following a three-point strategy of reducing sounds at their source, blocking sounds from entering the cabin and absorbing any remaining sounds.

LaCrosse's specific QuietTuning features include acoustical laminate on the windshield and front side glass; steel laminate on the front-of-dash body area; expanded baffles in the roof pillars; extensive use of melt-on sound deadeners throughout the entire lower body structure; and sound-absorbing material throughout LaCrosse's engine, passenger and cargo compartments.

In addition to easily identifiable icons covering everything from navigation to phone to music apps such as Pandora, next-generation IntelliLink is designed to accommodate new features and enhancements and be highly customizable. It also features natural language voice recognition, which allows customers to safely place calls, enter destinations, browse media, play music and control other functions simply by telling the vehicle what to do.

The system can store up to 60 favorites, including radio stations (AM/FM/XM), contacts, destinations and music from other media. This feature is convenient for those who travel to the same destination regularly and want to save locations such as hotels and restaurants.

On its eight-inch screen, customers can "fling" through lists, swipe and drag just as they would on a tablet or smartphone. Users with compatible smartphones can pair them with IntelliLink using Bluetooth or a USB connection. This gives customers the ability to play passengers' music or other media through the vehicle.

Another feature allows customers whose LaCrosses are equipped with available embedded navigation to enter destinations in a single step, without having to enter the state, city, street number and street name in successive efforts. City-by-city weather reports are also provided.
OnStar customers can access the service via the screen display or by the traditional Blue button.

The Collision Mitigation Braking feature can intervene in certain crash-imminent situations, automatically triggering emergency braking if the driver fails to respond to a previous alert. The Safety Alert Seat vibrates on the left or right side, or both sides simultaneously, depending on the direction of the crash threat.

The LaCrosse is one of the first vehicles to offer Lane Change Alert, which warns the driver of fast-approaching vehicles in the next lane that are up to 230 feet (70 meters) behind the car.

Efficient, refined driving experience
The LaCrosse is equipped with a choice of two efficient engines: the standard 2.4L four-cylinder engine with eAssist light electrification technology, rated at 182 horsepower (136 kW); and an available 3.6L V-6 rated at 304 horsepower (227 kW). Both are mated to six-speed automatic transmissions.

New 18-, 19- and 20-inch tires, along with revisions to some chassis and suspension elements, contribute to stronger handling across the model range, while new wheel designs – including LaCrosse's first 20-inch wheel – match driving experience with style. LaCrosse is also available with an advanced Haldex all-wheel-drive system with electronic limited slip differential (eLSD) that automatically decides how to distribute torque based on vehicle speed, throttle position and individual wheel slip. It also contributes to a refined driving experience, with minimal torque transferred to the rear wheels when all-wheel-drive traction isn't required, for a quieter, smoother ride.

Electric power steering is standard on models with the 2.4L engine, as well as 3.6L-equipped front-drive models. This technology helps save fuel by drawing energy only when the wheels are turned. It also contributes to the LaCrosse's driving experience with variable assistance at different vehicle speeds.

About Buick
Buick is a modern luxury brand offering vehicles with sculpted designs, luxurious interiors with thoughtful personal technologies, along with responsive-yet-efficient performance. Buick is attracting new customers with its portfolio of award-winning luxury models, including the Enclave crossover, LaCrosse sedan, Regal sport sedan, Buick Verano sedan and the all-new 2013 Encore crossover. Learn more about Buick cars and crossovers at www.buick.com, on Twitter @buick or at www.facebook.com/buick.

Note: Information shown is current at time of publication.