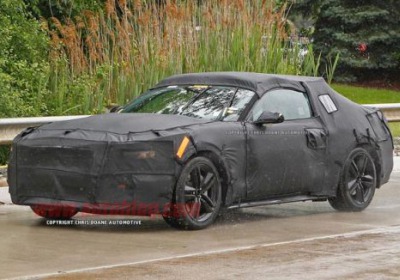 Following our first glimpse at the 2015 Ford Mustang out on the road, the fine folks at Road and Track have divulged some details on what the Blue Oval's next pony might have in store. We've already seen that the car will get some very sleek, Evos-inspired design cues, and an independent rear suspension is indeed in store. These new details, however, concern the muscle car's beating heart.

For starters, the base Ford coupe is expected to carry on with V6 power, likely from the same 3.7-liter unit found in today's car. From there, R&T says the next step up will be a four-cylinder EcoBoost engine, likely displacing 2.3 liters, putting out as much as 350 horsepower. Of course, a Mustang wouldn't be a Mustang without V8 thrust, and R&T states that the 5.0-liter Coyote V8 will continue on into the 2015 car, making something like 450 horsepower.

But it's at the high end of the Mustang range where things will, reportedly, get very, very interesting. Road & Track claims that the top-shelf 'Stang will likely lose the supercharger from its engine, producing a metric crap-ton of naturally aspirated grunt instead. Additionally, the SVT-fettled Mustang will likely be dropping its Shelby moniker, in favor of "a name you're familiar with," according to the magazine (you know, like, Cobra).

Look for the camouflage to come off before the end of this year.