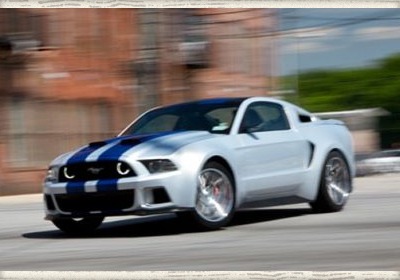 Dreamworks Studios, Electronic Arts and Ford Motor Company announced today that the Ford Mustang will play the lead hero car role in the upcoming Need for Speed movie, slated to hit theaters next February. Of course, the Mustang didn't audition for the role like we imagine the film's star, Aaron Paul of Breaking Bad fame, might have. Rather, Ford and Dreamworks struck a partnership deal that meant the Mustang could skip the casting couch. The deal will also see the film's universe populated with other Ford products (gratuitously so, we're guessing), and the automaker will also help the studio promote the video-game-turned-movie next year.

The hero car in question is a special one-off Mustang created by Ford that is making its debut at the E3 video game trade show as we speak. Powered by a supercharged V8 and apparently based on the Shelby GT500, the car's been modified with a widebody kit, 22-inch wheels, larger air intakes and twin hood nostrils. Ford also provided the film's production with an F-450 truck that will be called "The Beast" in the film's story, and a second Mustang to be used during filming as a camera car.

The Mustang's movie career is really taking off, with news of its Need For Speed casting closely following last week's release of the trailer for Getaway, a movie coming out in August that stars Ethan Hawke, Selena Gomez and another Shelby GT500. In addition to Aaron Paul and a modified Mustang, the Need For Speed movie also stars Michael Keaton (cop, we're guessing) and Dominic Cooper (villain, we're guessing), and is directed by Scott Waugh, who directed the Navy SEAL film Act of Valor in 2012.

LOS ANGELES, June 10, 2013 – Today, DreamWorks Studios' Stacey Snider, Partner and Co-Chair, and Ford Motor Company's Jim Farley, Executive Vice President, Global Marketing, Sales and Service, are pleased to announce an exclusive partnership for the feature film "Need for Speed," which will include significant integration of Ford products, along with extensive media promotion by Ford at the time of the film's release on March 14, 2014. The announcement coincides with the unveiling of a one-of-a-kind Ford Mustang for the film, during Electronic Arts' press conference at E3 Expo in Los Angeles later today.


The Ford-designed and created made-for-movie Mustang will be featured prominently throughout the film and become part of the mythology of the movie. The "Need for Speed" Mustang features a custom-designed wide body, unique 22-inch alloy wheels, and larger air intakes to feed the supercharged V8 engine under its classic Mustang twin-nostril hood.

"'Need for Speed' is rooted in Americana, and when we were casting our hero car for the film, Ford Mustang was the obvious choice," said Snider. "With its 50-year history in film, the iconic Mustang is the perfect co-star for Aaron Paul. We are privileged to have such an esteemed partner like Ford working with us on this film and look forward to seeing their Mustang up on the big screen next year."

Ford also provided the production with an F-450 truck known in the film as "The Beast," as well as another Mustang to serve as a specially designed camera car, which allows the filmmakers to capture car racing action in new and exciting ways.

"Need for Speed" marks an exciting return to the great car culture films of the 1960s and '70s, tapping into what makes the American myth of the open road so appealing. The story chronicles a near-impossible cross-country journey for our heroes – one that begins as a mission for revenge but proves to be a journey of redemption.

"Ford Mustang is a symbol of freedom and optimism that allows you to be the person you dream of being, making it the perfect fit for this story," said Farley. "Ford is excited to partner with DreamWorks and Electronic Arts as they bring the epic gaming franchise of 'Need For Speed' to the big screen, allowing us to go further with them as they tell their great story on the global stage."

The movie is based on Electronic Arts' popular video game series of the same name. It is one of the most successful racing video game franchises in the world, with more than 140 million games sold. The film stars Aaron Paul ("Breaking Bad"), Dominic Cooper ("Captain America"), Imogen Poots ("Fright Night") and Michael Keaton ("Batman"), and is directed by Scott Waugh ("Act of Valor"). George Gatins and John Gatins developed the story and wrote the screenplay. John Gatins, Patrick O'Brien and Mark Sourian are producing. The Walt Disney Company is distributing the film in the United States and select international territories, while Mister Smith Entertainment is handling distribution in Europe, Africa and the Middle East. DreamWorks' partner Reliance will distribute the film in India.

"'The Need for Speed' movie will embody everything that fans of action racing films want to see – hot cars, high-stakes street racing and mind-blowing stunts," said Scott Waugh, director of the "Need for Speed" film. "The adrenaline-fueled story across America will keep viewers on the edge of their seats."