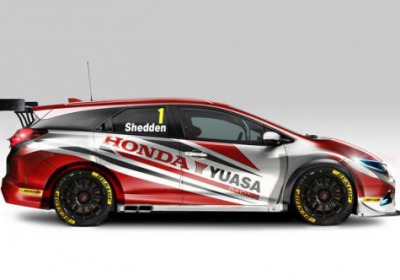 We all know that the letters BTCC stand for British Touring Car Championship. But one of those Cs might as well stand for Civic, so dominant has the Honda team been in one of the most competitive tin-top racing series in the world. Honda has taken the manufacturers' and teams' titles in the BTCC for the past four years running, and the championship-winning drivers for the past three years have claimed the prize behind the wheel of a Civic. While that might have proven enough for any other manufacturer, Honda is returning again next season to defend its dominant position, and has just revealed the new car with which it intends to do so.

Next year Honda will be back on the grid with another Civic, only this time it's based on the new Euro-spec Civic Tourer. That will make Honda the only team in the BTCC (and one of only a few worldwide) fielding a wagon-based racing car. In announcing the new BTCC-spec Civic Tourer, the Honda Yuasa Racing team only released this one photo and didn't reveal much in the way of details, but team manager Peter Crolla indicated that "the weight, wheelbase, layout and suspension remain the same" as the hatchback which it will replace, only with a longer roofline.

Testing of the new touring wagon will commence in January before returning champions Gordon Shedden and Matt Neal will pilot the new Civic Tourer in the season opener at Brands Hatch in the UK in late March. It remains to be seen what car Andrew Jordan (who took the title this year in another Civic with the Pirtek Racing team) will be driving next season, but in the meantime, you can check out the full press release below for more.

Honda Yuasa Racing will be back in the 2014 Dunlop MSA British Touring Car Championship (BTCC) with the same championship-winning team and driver line-up, but this time with an eye-catching all new Honda.

Next March will see the track debut of the new Civic Tourer race car – the only estate car on the BTCC grid - with Honda Yuasa Racing drivers Matt Neal and Gordon 'Flash' Shedden in the hunt for yet more titles. The team have their sights set firmly on a clean sweep of titles after the Honda Civics secured both the teams' and manufacturers' crowns for the fourth year in a row with Matt and Flash narrowly missing out on the drivers' crown in the 2013 season.

Gordon Shedden said: "2013 was an incredibly competitive season in the BTCC with the championship battle going right down to the wire! Of course it was disappointing not to retain the drivers title but we're looking forward to what I'm sure will be a strong year for the team in 2014 - and more excitingly, with a new car. It might be a Tourer, but it's still a Civic, the car that has won every championship in BTCC for the last three seasons. I'm really looking forward to the challenge of next season, and to seeing what the Tourer can do on race day."

Matt Neal added: "We're all confident that the car can continue the long-standing success of the Civic in the championship and very much looking forward to putting it through its paces. Although we're racing a new model, the inherent advantages of the Civic hatchback from the past two years remain so there's no reason why this car can't be a winner straight out of the box! We'll be testing the car early in the new year and I can't wait to see it on track."

Peter Crolla, Team Manager commented: "Racing with the Civic Tourer means no compromise over the Civic hatchback. The weight, wheelbase, layout and suspension remain the same, but naturally, the length of the car is extended due to the larger tailgate. After two competitive seasons in the BTCC with the hatchback, it will be an interesting challenge to ensure the Tourer keeps Matt, Flash and the team at the head of the championships throughout next season. We've worked hard over the past few months to develop the first car which will be completed as we head towards the new year, with the first run scheduled for early January."

Phil Crossman, Managing Director, Honda (UK) concluded: "We wanted to add a new challenge to the mix and really show what Honda and the team can do. By racing the new Tourer after several years with the Civic hatchback we can really showcase our growing range and demonstrate that the versatility and practicality of a Tourer doesn't compromise dynamic performance. We are only four months away from the start of the 2014 season and I can't wait to see the cars out on the track. They're going to look great and there's no doubt in my mind that they will win races."

Testing of the new model commences in January ahead of its race debut at Brands Hatch for the first round of the 2014 Dunlop MSA British Touring Car Championship on 29/30 March.

Designed and developed in Europe, the British-built Civic Tourer delivers distinctive styling, class-leading utility, advanced technology and an impressive balance between fuel economy and performance. Available to order from the beginning of December and arriving in dealerships in February 2014, prices start at £20,265 OTR for the entry level 1.8 i-VTEC S model.