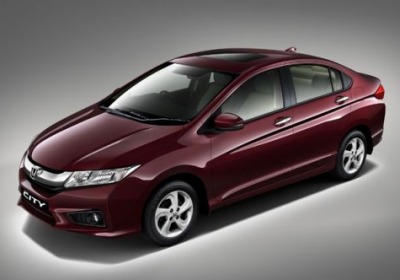 While car buyers on these shores may think of the Civic or Accord as the prototypical Honda sedan, in the Asia and Oceania regions, it all comes down to the City. Based on the Honda Fit, the City is a compact sedan that's currently sold in 55 countries around the world, and now Honda has revealed the newest version.

Standing essentially as a Fit sedan (much as the Vezel debuted as a Fit crossover), the new fourth-generation Honda City is as wide as the hatchback on which it's based, but stretches longer on a lengthened wheelbase and sits lower. Power comes from a 1.5-liter inline four in either gasoline or diesel form, mated to an unspecified transmission that we'd have to assume is either a manual or a CVT.

Styling looks familiarly Honda, and while it may be hard to tell from the few stock, detail and live reveal images the Japanese automaker has provided us with thus far, it appears slicker form than other compact hatchback-based sedans like the Ford Fiesta or Mazda2. Fortunately IndianAutosBlog has uploaded a couple of videos from the reveal, which we've included below along with the press release.

Set to be built initially in India, the new Honda City is earmarked to sell in some 60 countries around the world. We're anticipating that ours will be one of them, joining an expanding Fit family in US showrooms alongside the hatchback and crossover versions.