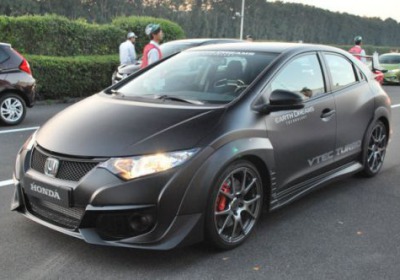 With a name like Earth Dreams, you'd be forgiven for assuming that Honda's new family of turbocharged VTEC engines is more about environmental credentials than performance. And to a large degree they are – particularly in 1.0- and 1.5-liter forms. But the 2.0 is another beast altogether.

Thanks to a high-output turbocharger, direct injection, a high-performance cooling system and, of course, variable valve timing, Honda's new 2.0-liter four produces upwards of 280 horsepower while still complying with upcoming Euro 6 emissions standards. Although actual output has yet to be confirmed, that preliminary figure already compares favorably with the Ford Focus ST (252 hp) and Mazdaspeed3 (274 hp) and rests comfortably in between the Volkswagen GTI (270 hp) and Golf R (296 hp).

Although Honda has already shoehorned the smaller 1.5-liter turbo four and 1.0-liter turbo three-cylinder engines into an Acura ILX and another Civic hatchback, the home it gave the 2.0 betrays more than an engine swap. What you see here is essentially the next Civic Type R, following a long line of Honda hot hatches. With this latest model, the Japanese automaker is targeting the front-drive lap record at the Nürburgring that belongs to the Renaultsport Megane Trophy and before that, to the lightweight Megane R26.R. A tall order, to be sure, so we headed to Honda's R&D center in Tochigi, Japan, to take it out for a ride.