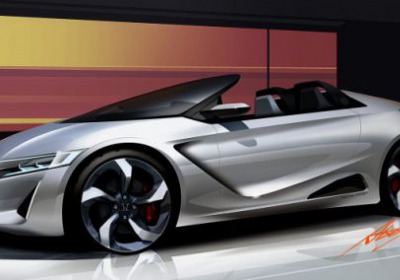 Honda isn't known for making convertibles. In fact, legend has it that old man Soichiro banned them from his lineup – but then he also didn't approve of six-cylinder engines, either. There have been exceptions, like the Civic del Sol and S2000, and today Honda has revealed another.

Set to debut at the forthcoming Tokyo Motor Show in late November is the Honda S660 concept, a compact little roadster about which Honda is saying even less. It looks about the size of a Kei car, with a nameplate that suggests a 660cc engine, making it more of a revival for the 1990's Beat than the high-end S2000. And while there are some clear similarities with the EV-STER concept that debuted two years ago in Tokyo, the S660 looks closer to production-ready, with key features like an actual steering wheel.

Of course, whether the S660 makes production, and beyond that makes it off of the Japanese islands and across the Pacific to US showrooms, is another matter, but we could see something like this taking the fight to the Mazda MX-5 and even the Scion FR-S and Subaru BRZ if it did.

Alongside the S660, Honda has also confirmed it will unveil the production version of the Fit-based crossover previewed in Detroit by the Urban SUV Concept. The NSX Concept will also make its Japanese debut at the show, along with a variety of motorcyles, mobility devices and a range of historic models from Honda's history, more of which you can read about in the press release below.

Honda Motor Co., Ltd today announced its line-up of production and concept models, including automobiles, motorcycles, power products and other highlights, ahead of the 43rd Tokyo Motor Show 2013, which will take place at Tokyo Big Sight from 20th November 2013.

Highlights on the Honda stand will include the Honda S660 CONCEPT, an open-top sports-type mini-vehicle, the world premiere of the production model of the URBAN SUV CONCEPT and the Japan premiere of the NSX CONCEPT, the next-generation super sports model.

Honda will also exhibit the all-new UNI-CUB, a personal mobility device developed under the theme of "harmony with people"; the world premiere of the N-WGN, the fourth model of the N Series of mini-vehicles; and a number of mass-production models, including the highly acclaimed all-new Accord Plug-in Hybrid and the Fit equipped with Earth Dreams Technology.

In the motorcycle area several planned production models will be exhibited, including the DUNK, a new style 50 cc scooter made for the Japanese market, equipped with a newly-developed liquid-cooled engine.

Overview of further highlights on the Honda stand: