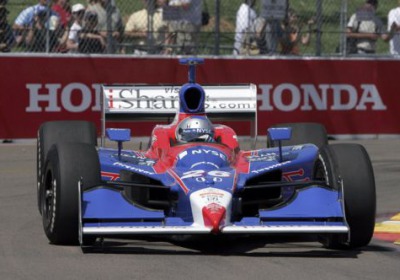 The IndyCar grid was split pretty evenly this season between Honda and Chevy power. Thing is, most of the front-running teams have been running Chevrolet engines. Except for Chip Ganassi Racing, the team that fields the likes of Ryan Briscoe, Scott Fixon and Dario Franchitti – but earlier this month Chip Ganassi announced it was switching to Chevy engines too, just like most of the other pack-leading teams.

Honda insisted it didn't need a flagship team to replace Ganassi, but that's exactly what it announced this weekend with the signing of Andetti Autosport. The team run by Michael Andretti won a few IndyCar Series titles under Honda power (in 2004, 2005 and 2007), and two Indy 500 wins (in 2005 and 2007), but switched to the Bowtie two seasons ago, winning the championship last season. But the vast majority of the team's victories – 39 out of 48 race wins – have been powered by Honda, and the two outfits undoubtedly hope they'll return to the winner's circle again with their new multi-year partnership that takes effect next season.

IndyCar champions Andretti Autosport® announced today that the team led by racing legend Michael Andretti will return to IndyCar Series competition in 2014 with Honda-powered machines as part of a multi-year agreement.

"We look forward to working with Honda again; for us, it's like being back home. I have no doubt that together we will see great success," said Michael Andretti, the team's Chairman, President and CEO.

The Indianapolis-based team has competed as part of Team Chevy for the last two seasons, winning the championship in 2012 with Ryan Hunter-Reay. Prior to the return of the IndyCar manufacture competition in 2011, Andretti captured three series championships with Honda (2004, 2005, 2007), as well as two Indianapolis 500 victories (2005, 2007). Since its inception in 2003, Andretti Autosport has captured 48 IndyCar Series victories – 39 of those under Honda power.

"We're extremely happy to welcome Michael Andretti and his Andretti Autosport organization back into the Honda Racing family," said Art St. Cyr, President, Honda Performance Development. "As many of you will remember, the Andretti organization played a major role in Honda's success during the previous era of manufacturer competition in Indy car racing, and we're looking forward to adding more victories and championships to an already impressive total."

Honda has been a fixture in North American open-wheel racing since 1994 and has played an active role in the growth of Indy car racing – as both a Manufacturers' Championship competitor and single engine supplier – since joining the series in 2003.

The company scored its first of nine consecutive Indianapolis 500 victories in 2004. Honda won Manufacturers' Championships in 2004 and 2005, and captured the drivers' championships with Andretti drivers Tony Kanaan (2004) and Wheldon (2005).

Honda became engine supplier to the entire IZOD IndyCar Series in 2006, and supplied racing engines to the full, 33-car Indianapolis 500 field each year from 2006-2011. For a record six-consecutive years, the '500' ran without a single engine failure, and the 2010 Indianapolis 500 marked Honda's 100th race win as a manufacturer and engine supplier in IZOD IndyCar Series competition.

About Andretti Autosport
Based in Indianapolis and led by racing legend Michael Andretti, Andretti Autosport fields multiple entries in the IZOD IndyCar Series. Andretti Autosport also campaigns multiple cars in Firestone Indy Lights, the Pro Mazda Championship and in the USF2000 Championship. In July 2013 the team announced intent to compete in the FIA Formula E Championship starting in 2014. The company boasts four IZOD IndyCar Series championships (2004, 2005, 2007 and 2012), two Firestone Indy Lights titles (2008 and 2009), one USF2000 championship (2010) and has won the Indianapolis 500 twice (2005 and 2007). For more information, please visit www.AndrettiAutosport.com.

See also: Honda CB350 and cafe racer culture explored by Electric Federal, This is what Honda's new F1 engine will sound like, Finalists for 2014 Green Car of the Year announced.