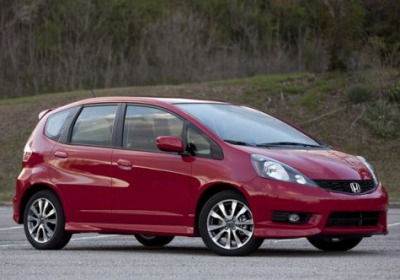 Revisiting The Runabout Of Record

The current Honda Fit has been around the block a few times. The subcompact hatch has soldiered on without significant revision since its first update for US customers in 2009, and while Honda is on the verge of launching a third generation, we thought we'd take the time to see how the runabout stacks up against the new wave of small, efficient and plucky five-doors now on the American market. Those include old standbys like the Nissan Versa and Toyota Yaris, as well as relative newcomers like the Chevrolet Sonic and Ford Fiesta.

Those machines may have all covered ground on the Fit, but Honda's wee machine holds a pleasant surprise for those buyers still willing to give the car the time of day. While the rest of the Japanese automaker's lineup has succumbed to dreaded model bloat, the Fit has remained true to the spirit of Honda that we remember from our vagabond youths. This may very well still be the closest genetic ancestor to the Civic models of old.

Outside, the Fit Sport continues to wear its "I'm the meanest June Bug" looks with pride. The oversized, wedge-shaped headlamps and aggressive lower fascia help lend the design plenty of attitude up front, and our tester's 16-inch alloy wheels keep this Honda from looking like it was the cheapest thing on the lot. Still, with a massive windscreen, tall greenhouse and short wheelbase, the Fit Sport can't help but look over-inflated, but that's a criticism we could levy at nearly every other product in this segment as well.


Once you're indoors, the bulbous exterior starts to make more sense.

The Sport body kit plays nicely with the Fit's attractive lines, which keep the aesthetics from turning too slab sided. Step around to the rear, and the subcompact serves up a surprising helping of angles, both in its number plate inset and with the hatch lines themselves. Sport guise also contributes a small rear diffuser and spoiler, and while the bits aren't fooling anyone into believing they actually deliver any major aerodynamic benefit, we appreciate the styling choice all the same.

Once you're indoors, the bulbous exterior starts to make more sense. The Fit Sport still delivers an impressive amount of headroom for passengers both front and rear. With 40.4 inches up front, the Fit bests the Sonic, Fiesta and Yaris. Only the Versa hatchback offers more space for your cranium, and only a smidge more at that with 40.6 inches (Nissan isn't offering a 2013 model year Versa hatchback; it's being replaced later this year by the 2014 Versa Note). Rear passengers, though, will find more headroom in the Honda than any of its competitors.


It's not just maximum cargo space where the Fit still wins, but also how those cubes are reconfigurable.

Some six years later, the plucky little five-door continues to be a packaging wonder. Its flat load floor helps deliver a surprising amount of cargo area with the rear bench folded – up to 57.3 cubic feet. That number is more than twice what the Fiesta delivers, bests the Sonic by 10 cubes and the Versa hatchback by nearly seven. In fact, it's more space than class-above competitors like the Ford Focus, Hyundai Elantra GT and Mazda3 hatchbacks. And it's not just maximum cargo space where the Fit still wins, but also how those cubes are reconfigurable to accept objects of various shape and size. The trick second-row seat bottoms flip up to provide more vertical cubes of stowage space than a car this size should allow, and the front passenger seat tilts all the way back to help accommodate objects up to seven-foot, nine-inches in length. For people who want maximum utility in the smallest, least expensive package possible, the Fit is king.

The Fit also delivers a refreshingly unfussy dash bereft of the smattering of screens or jigsaw assembly Honda seems enamored with as of late. Instead, the driver gets treated to a logical instrument cluster with simple, easy-to-read gauges. Our Sport tester came with an attractive steering wheel with a stitched and perforated cover. Redundant controls and paddle shifters are part of the package as well, but don't expect those paddles to do anything beyond look good. Click the hardware and the delay between shifts is long enough to write, publish and distribute your own novella.


If the rest of the segment has made up ground on the Fit anywhere, it's underhood.

That's not to say we're in love with everything indoors. The infotainment system is showing its age in a big way, with pixelated graphics and slow response times between input and execution. We've seen gas station fuel pumps with more sophisticated interfaces. And while the seats are both supportive and comfy, the cloth material is nearly impossible to keep clean with thousands of little pockets to trap lint and other detritus of modern life. Still, those are small complaints for a car with this many years on its bones.

Under the hood, you'll find the same 1.5-liter four-cylinder engine with 117 horsepower and 106 pound-feet of torque, and our tester marries the mill with a five-speed automatic transmission. If the rest of the segment has made up ground on the Fit anywhere, it's here. Chevrolet will gladly sell you a Sonic with a turbocharged 1.4-liter four-cylinder good for 128 horsepower and 148 lb-ft of torque, and when paired with a six-speed automatic, the combination is good for 27 miles per gallon city and 37 mpg highway. Throw a manual six-speed in there and those figures climb to 29 and 40.

For comparison, the Fit can only manage 27 mpg city and 33 mpg highway regardless of the transmission choice, and while the Sonic weighs in a full 200 pounds more than the Fit, the Chevrolet feels markedly more confident on the road. Likewise, the Fiesta delivers an Environmental Protection Agency-rated 29 mpg city and 33 mpg combined with a few extra ponies over the Fit.


You can a have a plethora of fun before you get anywhere near the limits of the vehicle or the law.

That said, the Fit is a shockingly enjoyable car to drive. Getting anywhere with any speed requires a certain familiarity with the engine's upper octaves, but like most Honda four-cylinders, the 1.5 loves to be wound out. Let the variable valve timing system do its magic and the engine does its best to come alive. But the real pleasure is in the vehicle's light weight and nimble feel, excellent suspension tuning and capable brakes. You can a have a plethora of fun in this machine before you get anywhere near the limits of the vehicle or the law. What's more, it doesn't take any work to hit those EPA figures, something we can't necessarily say for its competitors. We saw over 31 mpg even with a fair slice of hammering.

In this way, the Fit can't help but feel like a carbon copy of the Civics of old. This car is perhaps the last in the Honda stable that can follow its footsteps right back to the EF and EG generations, and it feels great for it. It also pulls at those heartstrings that are still tender for the Honda we've lost.

On the highway, the Fit is as quiet as any of its competitors and feels stable at speed. Though it may take some time to reach traveling speed, the driveline doesn't seem harried or out of breath at 70 miles per hour. As such, we could easily see covering four hours or so of roadway without wanting to feed our faces to a wood chipper. That's more than we can say for the Nissan Versa.


We have to tip our hat to the Fit for staying as sharp as it has for so long.

Make no mistake, the Chevrolet Sonic with the optional turbo engine is by far more entertaining to toss around, and it isn't as if opting for the more powerful engine will break the bank. Chevrolet asks just $700 to step up to the turbo in LT trim. Our Fit tester clicked up to just $20,580 with a $790 destination fee, complete with navigation, a six-speaker stereo and Bluetooth capability, which puts it neck and neck with its competitive set.

We have to tip our hat to the Fit for staying as sharp as it has for so long. While you can have more fun and get better EPA numbers out of some other players in this neck of the woods, the smallest of the Honda family still offers unbeatable interior space and an excellent drive. At the end of the day, this car is still far from the back of the pack and can hold its head high among much fresher metal.