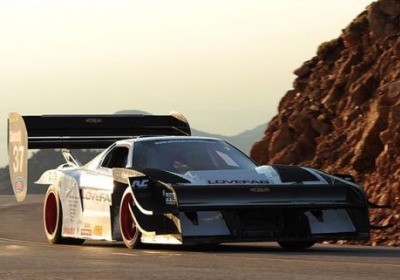 Honda plans to storm the Pikes Peak International Hill Climb on June 30, entering ten cars in nine classes at the race to the sky, and signing on as a corporate sponsor. Part of the company's return to grassroots racing – if that's what you can call factory-backed efforts – the banners of Honda R&D and Honda North America will fly on these entries: a first-gen Acura NSX, an Acura TL SH-AWD, Honda CR-Z, Honda Fit EV, one CRF450R and two CRF250R motorcycles, a CBR1000RR motorcycle and a TRX450 ATV.

One more entry, details of which are to be announced later, will be driven by IndyCar pilot Simon Pagenaud of Schmidt Hamilton HP Motorsports. LoveFab (pictured above during practice last year) will be there with its new, NSX-based Enviate, but as a privateer entry.

Honda's been to the mountain before, with high-powered gear in 2012 and record-setting EVs in 1994 and 1999, but it's never made noise like this. Have a read of the press release below for more info.

Honda to participate as sponsor and race participant, with plans to campaign an unprecedented 10 Honda and Acura products in nine race classes

04/23/2013 - TORRANCE, Calif - As a further extension of its growing commitment to grassroots racing in North America, Honda announced today that it is making a major commitment to the 2013 running of the legendary Pikes Peak International Hill Climb, as both a sponsor and race participant, with plans to field products in nine race classes, a first for any OEM in a single Pikes Peak event.

"Pikes Peak presents us with a unique opportunity to showcase Honda's diverse product lineup and to energize Honda fans around world, as we work to further strengthen Honda's presence in racing at all levels," said Mike Accavitti, Senior Vice President of Automotive Operations for American Honda. "Our associates will be working hard between now and Race Day to prepare this diverse field of race vehicles and showcase the Honda racing spirit."

With support from Honda's North American R&D and motorsports companies – Honda R&D Americas, Inc. and Honda Performance Development, Inc. – the company will campaign a broad range of Honda and Acura vehicles, as well as Honda motorcycles and ATVs. Honda will showcase its diverse range of fun-to-drive/ride products and will field 10 products in nine race classes, the most ever for a single race participant.

Along with Honda IndyCar team Schmidt Hamilton HP Motorsports pilot Simon Pagenaud, the vehicles will be developed and piloted by Honda's North American associates, under the banners of Honda Performance Development (HPD) and Team-Honda Research (THR). Pagenaud's Pikes Peak vehicle entry and racing class will be announced at a later date.

As a further extension of Honda's sponsorship effort, Honda Power Equipment will be supporting race operations, with Honda generators providing electricity and light to the pits and staging area.

Honda has competed in the Pikes Peak International Hill Climb on a less ambitious scale in the recent past. In 2011, Honda campaigned a Fit hatchback that was built and piloted by Honda engineers from North America. In 2012, the company fielded an Acura NSX powered by an ALMS P2 twin-turbo V-6 engine supplied by Honda Performance Development (HPD), and outfitted with an ex-Le Mans body and wide body kit, with support from members of the Ohio-based Honda of America Race Team (HART). Prior to that, Honda set records in the EV class in 1994 and 1999 with the Honda EV Plus. This year also marks the return of advanced Honda EV technology to America's second-oldest race, in the form of a 2013 Honda Fit EV.

About Honda
Honda offers a complete lineup of cars and trucks through a network of more than 1,000 dealerships in the United States. In 2013, Honda marks 40 years of the Civic model, with more than 30 years of producing automobiles in the region, which began with the Accord in Marysville, Ohio in November 1982. Having produced more than 25 million vehicles in North America through 2012 using domestic and globally sourced parts, Honda currently operates 14 major manufacturing facilities in North America, producing a wide range of Honda automobiles, all-terrain vehicles, power equipment products, engines and transmissions.

About Honda Performance Development, Inc.
Honda Performance Development (HPD) is the Honda racing company within North America. Located in Santa Clarita, Calif., HPD is the technical operations center for high-performance Honda racing cars and engines. As one of two engine suppliers to the IZOD IndyCar Series, Honda won the 2012 Indianapolis 500 with driver Dario Franchitti; and competes in prototype sports-car racing under the HPD banner in the American Le Mans Series and the FIA World Endurance Championship. In addition to its Fit and NSX entries, HPD has also previously entered the Pikes Peak event in 2011 with its Desert Pilot racing machine. HPD offers a variety of race engines for track applications from prototype sports cars to karting; and showcases "fun-to-drive" products for professional, amateur and entry-level racers.

About Team Honda Research
Founded in 1996 and covering both Ohio and Los Angeles, THR has a record of success racing Honda and Acura products in Sports Car Club of America (SCCA), NASA, and Rally-America competition, with more than 50 race victories in a variety of classes.