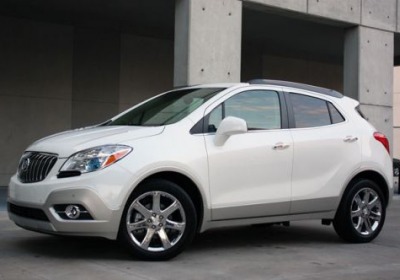 After being crushed from every which way and rolled over like a labrador, the 2013 Buick Encore has been named a Top Safety Pick by the Insurance Institute for Highway Safety. To earn the accolade, a vehicle must achieve the highest rating of "Good" in each of the institute's four main crash tests: Front Moderate Overlap, Side, Rollover and Rear. The Encore aced those four tests with "Good" ratings, but missed out on the coveted Top Safety Pick+ designation by receiving a Poor rating in the institute's new Front Small Overlap test. To be named a Top Safety Pick+, the Encore would need to score at least an "Acceptable" rating in the new test, as well as "Good" in all four original crash tests.

Despite the miss, the Encore joins the Enclave, LaCrosse, Verano and Regal as Top Safety Picks all. If you count only the Encore with all-wheel drive, then all five Buicks have also earned five-star overall ratings from the National Highway Traffic Safety Adminstration, making Buick one of the few manufacturers to offer a full lineup with high scores from both safety rating organizations.

The front-wheel-drive Encore, despite performing equally as well as the all-wheel-drive version in NHTSA's crash tests, only earned four stars overall. As far as we can tell, the discrepancy between the two is because some safety equipment, like Forward Collision Warning and Lane Departure Assist, are optional features on the FWD Encore and standard on the AWD model.

DETROIT – The 2013 Encore luxury small crossover brings a smaller footprint and high efficiency to the Buick showroom, but the brand's newest model maintains the commitment to safety, joining all other current Buicks as an Insurance Institute for Highway Safety 2013 Top Safety Pick. The Encore with all-wheel drive also received a 5-star Overall Vehicle Score for safety from the National Highway Transportation Safety Administration.

With every model sharing the IIHS designation, Buick is one of just a few brands with a full line of 2013 Top Safety Picks. The Verano, Regal, LaCrosse and Enclave all have a NHTSA 5-star overall rating.

The IIHS tests vehicles to determine occupant protection in front, side, and rollover crashes, and specifically tests seats and head restraints for neck protection in rear impact crashes. To earn a 2013 Top Safety Pick designation, a vehicle must be rated "good" in all four tests.

NHTSA tests for its 5-star safety ratings program include front, side and rollover testing, along with a side pole test simulating a 20-mph side-impact crash into a 10-inch-diameter pole or tree at a 75-degree angle just behind the A-pillar on the driver's side.

The Encore has 10 standard air bags, a standard Rear Vision Camera and the security of OnStar – a combination unmatched by any competitor. In a rollover crash, sensors in the vehicle deploy standard head curtain air bags prior to impact and leave them inflated for an extended period.

Available active safety features for the 2013 Encore include Forward Collision Alert and Lane Departure Warning, a pair of technologies that use a single forward-looking camera to read traffic patterns and lane markers on the road ahead. Visual warnings and audible tones alert the driver to unsignalled lane changes or a slowed vehicle.

"Safety is a top priority in Buick's product renaissance, as evidenced by receiving these latest safety accolades for Encore," said Gay Kent, GM executive director of Vehicle Safety. "Our customers can have confidence in the safety performance of every Buick for sale today."