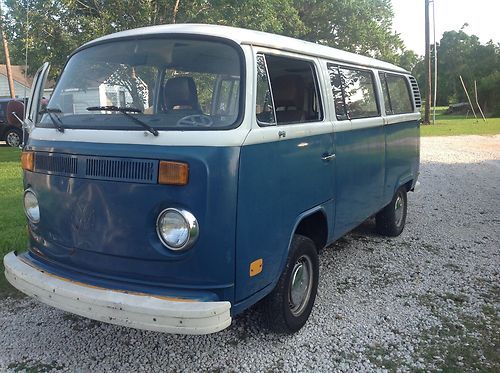 Condition: UsedA vehicle is considered used if it has been registered and issued a title. Used vehicles have had at least one previous owner. The condition of the exterior, interior and engine can vary depending on the vehicle's history. See the seller's listing for full details and description of any imperfections.Seller Notes:"This bus is used and has scratches, dents, dings, tears and other wonderful character details."

I bought this bus a few months ago as a restoration project and have just honestly lost interest. 3 businesses and 4 kids will do that. I've gotten as far as installing a new engine from West Coast Core, new exhaust, rebuilt tranny with new clutch, pressure plate and throw out bearing. This bus runs and drives amazing, shifts great and stops good. About 20 miles on this new engine.

I've also started acquiring other parts:
New front tin
New front seat covers and cushions from bus depot.com
Kick panels
The exterior has a rust thru in both front floor pans(small) and in the rear near the battery box. Both easy fixes. There is a little surface rust in other places but nothing that couldn't be sanded and painted. The windshield is solid all the way around. Good rubber under.
The sunroof was siliconed shut when I bought it. I've removed the silicone but so far unable to free it up under its own crank. No dents or excessive rust on the roof though so should just be a mechanical issue with the crank itself.
I kept the old engine and will be part of your purchase as well as all parts. The interior is not terrible but will need a new headliner for sure. The liner on the sunroof appears to be in real good shape and may just need a good cleaning.
Please email with any questions and I'll try to answer as quickly as possible.
Thanks for bidding and I'm certain someone who loves these VW's will enjoy finishing this one up.