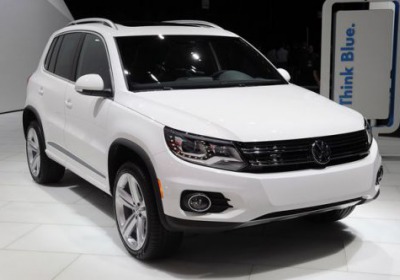 Volkswagen's Detroit Auto Show presence is big on utility this year, with the CrossBlue three-row concept vehicle occupying the lion's share of the limelight, both literally and figuratively. But that isn't stopping Volkswagen from lavishing attention on its already established crossover and sport utility vehicles with new R-Line derivatives. The Tiguan and its big brother Touareg are getting a host of look-faster items to increase their sporting appeal.

On the outside, the Tiguan R-Line receives handsome 19-inch alloys peering out from beneath fender extensions, premium lighting (bi-Xenon headlamps with LED daytime running lamps), along with matching side skirts and a liftgate spoiler. On the inside, sportier accommodations include aluminum trim and a flat-bottom steering wheel with paddle shifters. As with other R-Line models, there are no powertrain modifications to go with the more aggressive visuals (that being the province of R standalone performance models like the R32), though the suspension has been firmed up an unspecified amount. The Tiguan R-Line will be available in front- or all-wheel drive configuration.

The more upscale Touareg R-Line (not present at the show though revealed by Volkswagen earlier) receives a similar suite of upgrades, including a new body kit, 20-inch alloys, dual oval-shaped exhausts, LED taillamps and special badging. Like the standard model, the Touareg R-Line is available only with 4Motion all-wheel drive, but can be had with the buyer's choice of either gasoline or diesel power.

Pricing has yet to be revealed for either model, but VW promises both will debut in the third quarter of this year.


VOLKSWAGEN INTRODUCES PERFORMANCE INSPIRED R-LINE® TRIM ON TOUAREG AND TIGUAN SUVS Herndon, VA - Volkswagen of America, Inc. announced today it will offer the R-Line derivative on two additional models for the U.S. market. Joining the CC R-Line and recently introduced Beetle R-Line coupe, the Tiguan R-Line and Touareg R-Line will be added to the Volkswagen line-up for model year 2014. Both models will be introduced at the 2013 North American International Auto Show.

The Touareg R-Line and Tiguan R-Line models feature an aggressive appearance package and interior enhancements that provide an all-around dynamic and sporting appearance. Volkswagen R GmbH has developed the R-Line for drivers who want the sporty and aggressive styling of the Volkswagen R models, but without the additional engine performance.

Along with the interior treatments, the Tiguan R-Line becomes the fourth Volkswagen model to offer the award-winning Fender Premium Audio System. The system features a 10-channel, 400 watt amplifier with eight speakers and a rear subwoofer.

Touareg R-Line
The Touareg R-Line adds a host of dynamic and sporty elements to the long list of standard equipment on the Touareg Lux trim. Naturally, all Touareg models come standard with 4Motion all-wheel drive mated to an eight-speed automatic transmission and the R-Line adds a sport-tuned suspension to either the 3.0-liter VR6 gasoline or 3.0-liter TDI Clean Diesel engine.

Inside, the R-Line theme continues with unique high-gloss black and brushed aluminum trim on the dashboard, center console and doors. Stainless-steel R-Line scuff plates, aluminum sport pedals, and an R-Line steering wheel round out the model's interior enhancements.

Both models are slated to go on sale in the third quarter of 2013. Pricing will be announced closer to launch.