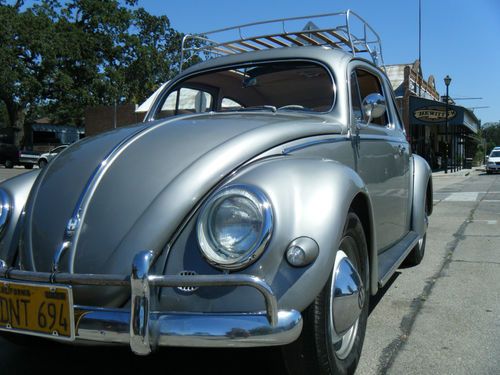 Condition: UsedA vehicle is considered used if it has been registered and issued a title. Used vehicles have had at least one previous owner. The condition of the exterior, interior and engine can vary depending on the vehicle's history. See the seller's listing for full details and description of any imperfections.Seller Notes:"Recent complete restoration"

1956 Ragtop Beetle. Recent pan-off complete restoration completed January 2013, all original body parts. Original pan with matching numbers. ragtop,is original and not a weld-in. This car had no rust or accidents prior to restoration. All chassis parts, brakes, everything rebuilt to original specifications. Paint is polar silver and interior is red. Mohair cloth headliner. Paint and interior colors are correct for this car.  I have had this car for seven years and purchased it locally from a storage barn where it had sat for many years.

36 hp motor was professionally rebuilt. Runs perfect and drives excellent. All steering components rebuilt. All seals, and rubber parts replaced with German parts. Pan was refinished to gloss black. Body was painted separate from pan and car was re-painted in and out.
Current title, 1956 plates. All lights and electrics work. 6 volt system. This car is ready to enjoy or customize it with extras. Please do not bid unless you are a serious buyer, i really need to sell this vehicle to help pay off medical bills. Please inquire about additional photos or details. Car must be picked up on location in Atascadero, CA. I can assist with shipping.
On Aug-06-13 at 20:27:12 PDT, seller added the following information: