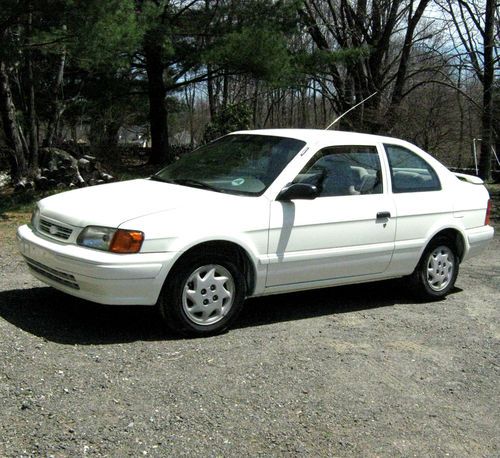 THIS IS AN ESPECIALLY NICE CAR.  ALTHOUGH ALL THE WHITE HAWK AND BLACK HAWK EDITIONS CAME WITH ALUMINUM "MAG" WHEELS-- IN ADDITION TO OTHER UPGRADES--THIS CAR IS IN REALLY GREAT CONDITION, WITH ABSOLUTELY NO RUST, DENTS OR OTHER DAMAGE.   VERY SIMPLY, THIS IS ONE OF THOSE "SPECIAL" VEHICLES THAT ARE ABSOLUTELY BULLET-PROOF, REGULARLY EXCEEDING 400,000 MILES ON THE ODOMETER WITH LITTLE MORE THAN REGULAR OIL CHANGES AND AN OCCASIONAL SET OF TIRES AND BRAKES.
I PURCHASED THIS CAR ABOUT 2 YEARS AGO FOR MY DAUGHTER. THE PREVIOUS OWNER SUNK SEVERAL THOUSAND DOLLARS INTO THE CAR--WITH NEW TIRES, NEW SHOCKS, AND MUCH, MUCH MORE. HOWEVER, HE WAS A LARGE MAN, AND BY THE TIME HE GOT AROUND TO REGISTERING THIS CAR HE HAD GAINED QUITE A BIT OF WEIGHT, AND COULDN'T FIT INSIDE IT ANY MORE.  MY DAUGHTER DROVE IT FOR 2 YEARS BUT RECENTLY PURCHASED A NEW HONDA, SO THIS LITTLE SCREAMER HAS GOT TO GO.
HERE A LIST OF WHAT IS NEW OR RECENTLY INSTALLED ON THE CAR
1)    NEW WHITE PAINT, APPLIED LAST WEEK. PAINT IS THE SAME HEAVY-DUTY RUST INHIBITING PAINT THAT IS APPLIED TO NEW YORK STATE SPREADER HOPPERS.  IT WAS ACTUALLY PAINTED IN THE SPREADER/HOPPER PLANT, WITH THREE COATS OF GRAY PRIMER FOLLOWED BY THREE COATS OF FINISH PAINT APPLIED.
2)    NEW DRILLED-AND-SLOTTED ROTORS WITH CERAMIC BRAKE PADS. CALIPERS HAVE BEEN PAINTED WITH RUST INHIBITING RED PAINT.
3)   NEARLY NEW TIRES HAVE ABOUT 4000 MILES ON THEM.
4)   NEARLY NEW CATALYTIC CONVERTER AND EXHAUST
5)   NEW SPARK PLUGS, WIRES.
6)   NEW WATER PUMP, THERMOSTAT.
7)   NEW TIMING BELT
8)   NEW SERPENTINE BELT & ALTERNATOR BELT
9)   NEW CAMSHAFT AND CRANKSHAFT SEALS.
10)  NEW PERFORMANCE CLUTCH AND FLYWHEEL.
11)  NEW FUEL INJECTORS
12)  NEW COIL PACKS
13)  NEW WALKER SHOCKS
MOST OF THE ABOVE PURCHASES--OTHER THAN THE DRILLED-AND-SLOTTED ROTORS AND CERAMIC PADS, COIL PACKS, FUEL INJECTORS AND SPARK PLUGS --WERE MADE BYTHE PREVIOUS OWNER, AROUND THE TIME THE CAR TURNED 195,000 MILES. i HAVE A STACK OF RECEIPTS THAT YOU CAN LOOK THROUGH DOCUMENTING MUCH OF THIS WORK.
THIS TOYOTA RUNS REALLY STRONG, AND THE AVERAGE COMBINED CITY/HIGHWAY MPG IS 32 MILES-PER-GALLON.  BY THE WAY, ONE ADDED BONUS:  BECAUSE THE HEADLIGHT LENSES ARE THICK GLASS--AND NOT PLASTIC--THEY WILL NEVER TURN DULL, CLOUDED OR WORN LIKE THE CHEAP PLASTIC LENSES.
THE CAR HAS A CHECK ENGINE LIGHT, HOWEVER THIS IS A MOOT POINT SINCE IT IS APPARENTLY NOT IN THE SYSTEM AND THEREFORE HAS NOT BEEN CALLED FOR EMMISSIONS.   IF YOU WANT TO GET RID OF THE IDIOT LIGHT, MY MECHANIC FRIEND INQUIRED WHEN THE LIGHT COMES ON, AND WHEN I INFORMED HIM THAT THE LIGHT CAME ON WHEN I  FLOORED THE THROTTLE GOING UP A HILL (WHICH COULD CAUSE A BRIEF "STUMBLE") HE ADVISED ME IT WAS A CLOGGED "EGR" VALVE.
THIS TERCEL IS VERY CLEAN, HAS NO RUST ISSUES, NO TEARS IN THE UPHOLSTERY, AND NO DENTS OR DEFECTS.
THIS TERCEL IS AN EXCELLENT VALUE, AND AS WITH ALL MY AUCTIONS I NEVER INSULT A POTENTIAL BIDDER'S INTELLIGENCE BY USING A "BUY-IT-NOW" OR SUGGESTING A MINIMUM PRICE.  ALL MY AUCTIONS START AT $.99 CENTS AND END WHEN THE WINNING BIDDER DETERMINES THE FINAL SALE PRICE.
PLEASE NOT  AND BY THE WAY--BECAUSE E MY 100-PERCENT "FEEDBACK" RATING. LOOK THE PHOTOS OVER CAREFULLY AND CONTACT ME WITH ANY QUESTIONS THAT YOU MAY HAVE.  I ENCOURAGE YOU TO INSPECT THE VEHICLE AND TAKE A TEST DRIVE. I AM LOCATED IN NORTHWEST CONNECTICUT, IN A SMALL "BEDROOM" COMMUNITY. YOU CAN FEEL COMPLETELY SAFE EITHER INSPECTING, TEST-DRIVING OR PICKING UP THIS CAR.
******************