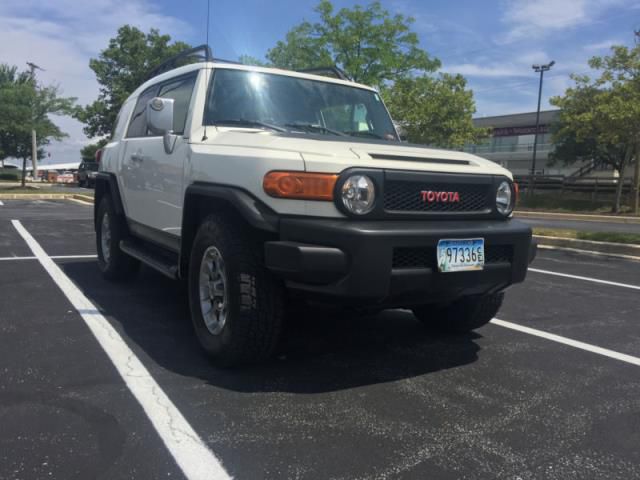 New Listing- I had to remove the old listing because of some errors in the description. Errors include (mileage, tires model, reserve price (really sorry about this one- but it didnt hit the first time) For Sale: 48,000 + miles (daily driver so it will go up). 2013, well maintained Toyota FJ Cruiser. - All regular and recommended maintenance performed by Toyota using ONLY synthetic oil (except the last oil change, done locally with synthetic). - Approximately 48,500 highway miles (daily driver so mileage may increase). - Brand new Nitto Terra Grappler tires installed in the end of June with less than 1,750+ miles on them (over $1,000). - Sale includes 2 original factory keys and 1 additional valet key. Options: Power Windows Power Locks Cruise Control Back up Camera Trailer/ Towing Package (factory installed). Sat Radio Roof Rack AC Locking Diffs A- Trac Factor weather passenger mats Premium 17 wheels Dashboard inclometer, compass, thermometer. Parking censors There are others, I bought this truck with every option. I added: K/N high performance and reusable air filter (both engine air and cabin air). Blacked out bumpers (plastidip) (can be removed) Vinyl hood deflector (blocks glare) (can be removed). Undercarriage rust protectant (important with FJs) Defects: - There is a slight scratch on the passenger dash and in cargo area. - There are only a few small scratched in paint (will show in pics) Otherwise the truck runs and operated perfectly. I am even one of the few owners who probably shift their vehicle into 4WD Hi and Low once per month to cycle oil in transfer case (as recommended in the owners manual). If you buy this vehicle I will do whatever I can to reasonably help with delivery. Depending on where you are located, I would be willing to drive and even meet halfway. *Auction does not include shipping. By the way- I am selling because kid No. 3 is on the way! Otherwise I would drive this FJ til the end! It is a great truck!
Email me at : josegeiger0sj@emailasso.net

Toyota explains what names like Camry and Yaris mean

Ever wonder where automakers get the names for their cars? You're not alone. The sitcom Seinfeld opened Episode 94 - the one where George Costanza buys a Chrysler LeBaron instead of a Volvo - with a bit about nameplates like Integra, Supra and Impreza. Toyota, clearly, is not exempt from choosing evocative but enigmatic names for its models, and now the Japanese automaker is taking us through the etymology of some of its nameplates.
Names like Supra may require no clarification, but what about Camry? That comes from the Japanese word kanmuri for Crown (which is, incidentally, the name of another Toyota sedan).
Yaris? According to the company, it's "an amalgamation of words from Greek mythology and German. In Greek mythology, 'Charis' was a symbol of beauty and elegance. Toyota swapped the 'Ch' with 'Ya' - German for 'yes' - to symbolize the perceived reaction of European markets to the car's styling."