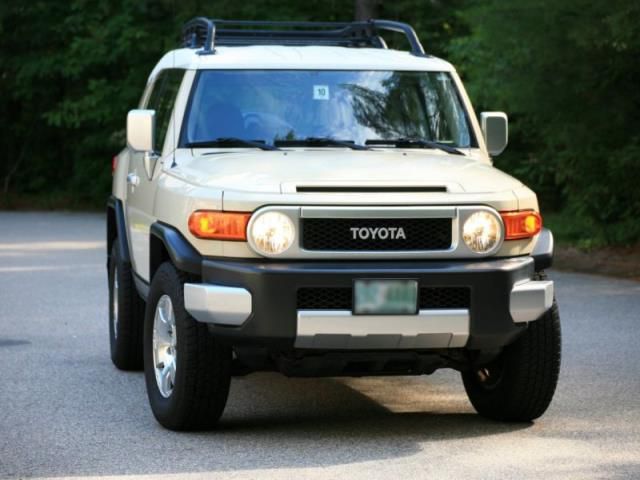 2009 Great Condition and well maintained Toyota FJ Cruiser -Original ownership - All regular and recommended maintenance performed by Toyota using ONLY synthetic oil. Most resent service 07/20/2016 (85K miles service) - Only high octane fuel. - Approximately 84,500 miles (presently 8404 miles) - New tires and brakes installed this spring. -Remote Starter and GPS (not factory) - 2 original factory keys and 1 additional emergency key. ModelModel: 4704Year: 2009Interior: DARK CHARCOALExterior: SANDSTORM METALICNumber of Cylinder: 6 Mechanical4.0L V6 DOHC 24V 5Spd Auto O/DrPart Time 4x4Variable Gear Power SteeringFull Size Spare-Rear Door MountedDr & Front Pass AirbagsSide Impact Airbags/Roll Over Sensor1st & 2nd Rw Curtain Shield Airbags(CSA)Star Saftey System Includes VSC w/TRAC& ABS w/Brake Assist & EBD Other Power Windows Power Locks Tow hook receiver Roof Rack AC Rugged Ridge front floor mats Chrome step sillsTow Hooks (2 Front/1 Rear)Mudguards6 Speakers (2 in Headliner) Daytime Running LightsTire Pressure Monitoring SystemEngine ImmobilizerSpare Tire CoverFirst Aid KitAll Service ReceiptsManuals Defects: - Bumper dings and tiny door scratches from parking lots (I have a brand new bumper to replace but have not felt it worth while.) - The interior does have scratches on the plastic especially in the trunk. * Reason for selling: I need to buy my daughter a car so I need extra cash. *Auction does not include shipping. *Options for collecting vehicle: There is a bus service that goes between Manchester airport and North Conway NH. *For more information call Grant at 603 356 0354. Please leave a message and I will return your call.I can also email additional photos. *I am listing locally and reserve the right to cancel this auction at any time prior to close. Personal opinion:I am an artist and I work from home so I do very little driving, mostly taking kids to school. I love this FJ and I have looked after it like a baby. If I look at the vehicle without emotion honestly I would say the exterior is really great and it is mechanically very sound… they are tough vehicles. The interior is very good in the front but the rear interior does have some ware and scratches. When I first bought the vehicle I had an old German Shepard and I didn’t have the heart to make him stay behind on trips. I let him jump in the back and he left scratch marks.
For more details eMail me : frasier8kyvonne@laposte.net